I’m currently looking at using some OL in my classroom and need to make a version of the character sheet with “simpler” words for lower-level English speakers. What tools would you recommend for creating a character sheet pdf?

Also, as a separate issue, does anyone know of an online dice roller that automatically does exploding dice?

Thanks in advance guys,

Well, Roll20 does, though that may be a bit more than what you are looking for. I’m guessing you aren’t as worried about the “random seed” to make sure the dice are as random as possible.

There is an App that someone has made in the community which can roll dice:

Hey All, I've made my mobile app Live! Yay :), It's not stylish but hopefully it's functional. Below is a site I made with basic tutorials which I recommend since I'm still working on an in app tutorial feature. http://zachung85.wixsite.com/oplegend Here is the link for the android version. https://play.google.com/store/apps/details?id=org.nativescript.openlegendcharacterbuilder Here is the link for the IOS version. https://itunes.apple.com/us/app/op-legend/id1269126628?ls=1&mt=8 If you ha…

As far as the Character Sheet, I typically use Acrobat DC for PDFs but there are free options out there. You can also just create one simply in any word processor or spreadsheet type program.

Do you already have the “simpler” words picked out for each Attribute. I know there are some in the community that could probably whip you up a sheet (myself included, though I am traveling right now so might have to wait a week until I get back if no one else does).

Thanks for the mobile app, I had no idea this was available!

I’d also like a dice-roller that is web based so I can display it on the big screen for the class. The sheet on Roll20 may do fine.

As for the sheets, I will have about three sets of words to use with different levels. I’m going to take a stab at doing the sheets myself because I am going to need multiple variations depending on the class / student and topic.

I’m the sheet author on roll20, so I could potentially make you a custom sheet with the varying words on it for you and set it up so you could use it if you don’t have a pro account.

Indeed I know you are the creator of the Roll20 sheet - which is why I have a shrine dedicated to you at home.

I really appreciate the offer! Everything is experimental right now, if my next few classes produce good results, I’ll be looking to do some online classes and a custom Roll20 sheet would be the bomb. (Do we still say that in 2017?).

as long as you are not in or near an airport

Love the idea of using it in a classroom setting, and have read how people have done similar things to great success at recreating the feel of a time period, etc and other things.

Be happy to help in that endeavor.

Happy to have allies!

I’m working on a book on the subject. Was using Risus for the past two years for teaching but now am exploring Open Legend. I think there is much more I can do. Having complete control over a situation that I can drop my students into, one that encourages them to use specific skills that we have been working on is golden. Also, the character sheet alone has material and vocabulary that can stretch to two lessons worth. Sometimes students don’t know what to do or say in a situation but looking at a character and seeing what they would do is usually easier.

I could chat for hours on this

If you ever get a sheet version with simpler words it would probably also be a great help to non native speakers. I know that some players on my group struggle with the words (for example the words “banes and boons” were new vocabulary to them, making it a lot harder to imagine what you can do with it)

Absolutely. This is my main mission for the rest of this year and 2018. All materials that I generate as a result of my research, trials and general use I will be making available to the Open Legion.

Completely understand the struggles with non-native players. I find there are two main approaches that work.

I will be field testing some of my custom sheets in a live classroom possibly next week. Unless it goes down in flames I will share it here.

As a side note. I don’t think you can ever replace the effectiveness of the wordage that the OL team finally decided on. It must have been a tough process to find the words that properly conveyed everything the stat is good for.

However, suitable synonyms for non-native users can sacrifice a little accuracy in exchange for something easier to understand.

eg. Might may become Strength - It conveys the general idea of the stat and the player will pick up during the game via the GM’s guidance what they can use it for.

this is true of native english speakers as well. Some of the terms are brand new for them as well, specifically those two words.

On the flip side, I know people that learned vocabulary from playing RPGs.

So here is the json file (open it in a text editor, it’s easy to understand) for English (thus en.json). It’s also the basis for HeroMuster’s Character Sheet translations. If you want to create new versions saved as en#.json, where # is a grade-level (an easy way to define levels of simplicity), I could add easily add them to HeroMuster so you could have a link to that version (and print them etc).

Just change the text on the RIGHT SIDE of the JSON file, for instance:
"Might": "Strength",

You can email them over to me: mlurig@heromuster.com if that’s easier.

So once I have done a couple of trial lessons and have the words set, I’ll fill this out.

Between this and @Great_Moustache’s kind offer to help with the Roll20 sheet - this is going to make online play and character gen less intimidating for low / medium level non-native speakers!

I think that idea is so amazing, I can’t even describe it. I taught literacy and suchlike while in social services and the biggest problem is that adults are not children and they have life experience–while some learning modules are built to work with that–many students don’t want to describe/write/share their life stories in a room of strangers etc. and it makes some uncomfortable or recalling can resurrect trauma.

I think back on learning French. I couldn’t learn it in school. Later in life, I had friends who spoke mainly French and they played a home made board game called, “Tock”. Within weeks, I spoke passable gutter French. While my verb tenses etc may have been atrocious at times, I understood them and they understood me–and it was entertaining and didn’t seem like a chore, to boot.

I think using an RPG to teach ESL is a brilliant idea. It fires the imagination and aids in social skills and problem-solving, as well.

Let us know how it turns out!

Thanks for the story and your kind words.

I hadn’t thought about it from the perspective of an adult who doesn’t want to share. Which is funny because I do sometimes face that issue in my classes depending on the student / class dynamic.

So I drew out a rough draft of a character sheet idea. This is actually made to be a “booklet”

The first page here is the “front”, and it folds in half. This side has items you dont’ access or look at as often as the others on the “back” side. You have a spot where you can put a portrait and some basic info, then the back of the booklet is what is on the left half. A place for inventory and notes, as well as Wealth Level. 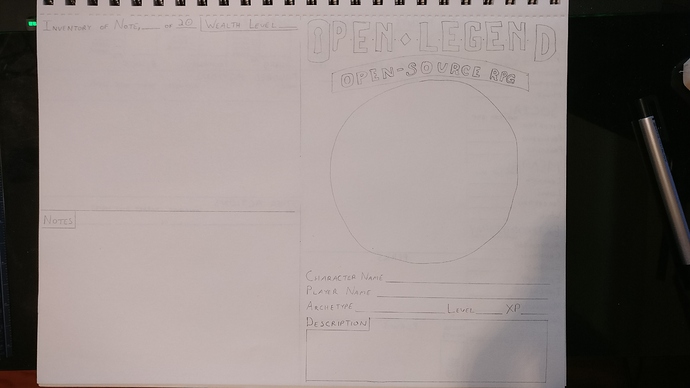 The second page here is the “back”, or in reality the inside of the booklet. It has all the information you are more likely to access on a regular basis while playing. Attributes on the left, Hit Points, Speed, and Defenses across the top. Places to fill in your Feats, Perks, and Flaws, just white space so you can fill in the info as you see fit.

Then on the far right you have “Favored Actions”, ones you use the most, and then “Other Actions” below that. I didn’t draw out all the lines, b/c this is the rought draft version, just pencil. 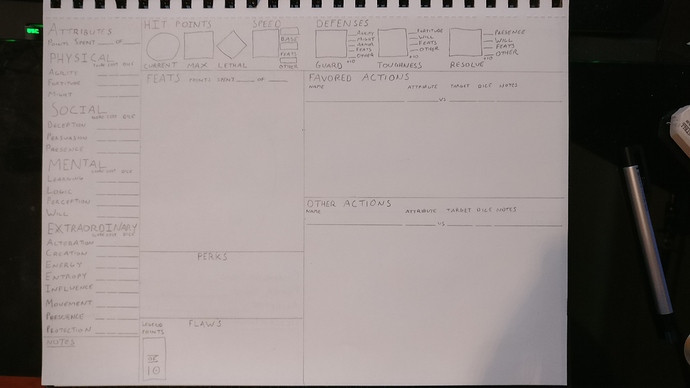 Thought this might apply some to what you were thinking about @Plus , could be a nice booklet form to hold in a class.

Here’s a better look at it after I inked the pencil:

Alright Open Legion Fam, here they are, BETA VERSIONS Form fillable, with tabbing going in the correct order through the sheet. Character Sheet Booklet Fillable BETAv1.pdf (373.4 KB) Same as above, BUT with the addition that you can click the button on the first page to upload a picture from your computer for the portrait art. Character Sheet Booklet Fillable Pic BETAv1.pdf (373.8 KB) Please give feedback on thoughts, improvement, and any problems. EDIT: Here is the "Rough Draft"…

I like it. It adds the much needed inventory that the official one doesn’t.

<Insert “Palpatine - We will be following your career with great interest”.gif>

I am not a native English speaker and I pretty much failed each and every English test (it’s a compulsory subject in Taiwan since 5th grade in my days, 1st grade today) before I went to Canada and somehow I end up playing TRPG with only English resources (like 7th Sea and now studying Open Legend) available, even translated some core rules so that some friends who doesn’t read English could join.

But even at this level, I’m still having some trouble with some words, and I know sometimes it’s more of a cultural issue than the word itself, but a simple sheet would definitely help most of the players with only the very basic level of English, and a lot of the players (and students too, sometimes) will be encouraged with a language barrier just high enough for them to overcome by themselves (I’m one of the example), and with your experience in teaching I believe it would really help a lot of the player.