What are your favorite Sci-Fi or mixed Sci-Fi RPGs/Settings?

I’ve been toying with a homebrew world/campaign. It’s my first one, and I keep getting new ideas that drastically change the concept which results in me not making much progress toward a playable game. I think part of it is that I have very little exposure to this type of game, and am more used to the high fantasy feel. I played a little Star Frontiers back in the day, but that’s probably the sum total of my sci-fi RPG experience.

What are some of the best Sci Fi RPG concepts that might provide some insight or inspiration? Are there any that mix magic of some sort and high-tech sci-fi fairly well?

I am looking forward to Amaurea’s Dawn to see how it’s done there for sure, but I also have specific sci-fi features I want to include (like genetic engineering and AI), and I’m impatient!

Farscape is one of my favorite Sci-Fi shows, and it has both magic and tech. Zhaan is a priestess who uses magic for various purposes, though it’s kinda subtle. They also have living bio-organic ships capable of jumping great distances through space, so really fun.

And of course, star wars has magic (the force) and tech.

Numenera is quite a cool mix of Sci-fi and Fantasy. One might call it “Science-Fantasy”. They’ve got some gorgeous art, and great adventures and ideas. The theme is “Earth in a billion years”. The Earth has been through the rise and fall of 8 prior civilizations, who each attained so high levels of technological progress that some of them managed to stabilize a dying sun, or travel to other dimensions of reality. The big hook to using this world (or getting inspired by it) is that ANYTHING can be ANYTHING you like (the “ethos” of Open Legend, one might say. A magical item that transform lead into gold could be employing nano-bots, or use extradimensional “magic” to twist the molecules into different patterns and alter their properties. I personally think that this setting is great for using the Open Legend system.

The thing you don’t find a lot of in Numenera is space travel. Though it is certainly possible, the big hook is that the Earth is so mysterious that there are SO MANY things to discover on Earth alone.

Numenara looks really cool! I also am not super-interested in space travel in my game. Maybe eventually, but one world is enough for me to worry about!

Firefly. I’m currently running a campaign based off of it.

Mass Effect takes a lot of cues from Asimov (whom I love) and is packed with variety in terms of races, technology and settings. It goes into pretty deep explanations of how things work if you’re interested (which I am) but still makes sense on the surface without needing those explanations.

Star Wars I like a lot just because of how deeply ingrained it is in popular culture. Whenever I run a sci-fi game that’s my go-to setting. There’s not many other settings in existence where you can go to any random group of players (I run games at a local society so end up GMing for new people very often) and go “We’re playing this setting” and it not require any further explanation. Everyone knows what a Stormtrooper is, everyone knows that Wookies are huge and strong, everyone knows that the Force has a light side and a dark and binds the galaxy together.

light side and a dark and binds the galaxy together. 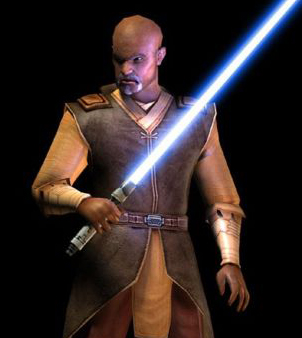 The term Gray Jedi, or Gray, had two meanings. First, it was used by Jedi and Sith to describe Force-users who walked the line between the light and dark sides of the Force without surrendering to the dark side, and second, it described Jedi who...

I’m aware of the more complicated aspects of the Force

For my most recent campaign I helped one of the players build a character who was a Force Witch of Dathomir. http://starwars.wikia.com/wiki/Nightsisters

My point is that I don’t need to dump all of my knowledge about the setting onto players for them to have a good time playing.

I’m a big fan of Shadowrun. It’s definitely got magic + technology. Though whether or not you consider cyberware and its take on hacking and computers as “high-tech” is another question.

All good suggestions and ones I will look into for ideas and inspiration! I’m definitely leaning toward bio-hacking and AI themes for most player powers, but have waffled on whether to include some more “mystical” powers in the world too or whether that just makes things muddy. I go back and forth.

Firefly is one of my favorites. Robotech is another one.

I just remembered how cool and awesome the world of Wildstar is. It’s an MMO with an amazing setting and fantastic lore. Do check it out.

Star Wars. I love how deep and rich the lore is (even if it is convoluted between cannon and non-cannon). Also cuz lightsabers.

Wildstar does look cool, but I don’t have a windows machine capable of running games

I am definitely a big Star Wars fan, but I have a son who is about as big a fan there is, and knows most of the lore, canon and non-canon, so I get a lot of extra knowledge second-hand

P.S. I started posting my work-in-progress, very disorganized at the moment!

I am a novice GM, having only run pre-written content for maybe 10 sessions over my way-too-many-years-to-mention of casual gaming. Inspired by the freedom of Open Legend, I feel like I'm ready to try my hand at a new world and adventure. I've has so many ideas, the biggest challenge has been nailing down the details and coming up with enough an initial setting and story arc to get started. In the interest of getting some feedback (and a swift kick in the pants) to keep me going, I decided to…

For me Firefly/Serenity is pretty much also the same-ish as Cowboy Bebop. And all of that kind of overlaps with Traveller. But Traveller has aliens, so kind of not also.

ROBOTECH lead me to Mobile Suit Gundam, which I think is a better take on mecha- at least the Universal Century continuity.

I think my ultimate favorite sci-fi is DUNE, however.

Holy necromancy Batman, anyway Robotech was never but firefly was a great series. Never got to do a RPG game for it. I did run a stargate game for awhile.