Ways to Use Attribute Substitution

We have a lot of really creative minds in our community, finding new ways to make their character concept come to fruition using the given rules in Open Legend. One thing a lot of us like to use is the feat called Attribute Substitution. It’s a unique feat that works pretty much like how it sounds. You choose one Primary Attribute and use it in place of a Dependant Attribute. Pretty cool, right?

I’ve thought of a lot of ways to use the feat that fits the narrative. But I want to see what else you have come up with!

Here are some examples:

Arthromancer - Level 1 With the ability to control insects, the Arthromancer preys on his enemies' fears. This archetype works best in a Fantasy setting, but it can be pitched to a DM for use in any setting that has bugs (Sci-Fi, Post-Apocalypse, etc.). Attributes Perception - 2 Will - 4 Presence - 3 Influence - 5 Movement - 3 Feats Attribute Substitution II (Influence > Entropy) Ferocious Minions I Defenses Guard - 10 Toughness - 14 Resolve - 17 Speed - 30' Hit Points - 24 Wealt…

If you have some ideas, post them here in the replies! Make sure you include the story it tells, what kind of RPG genre it’d be used in, what the synergy will primarily be used for, etc.!

Influence = Alteration
A powerful psychic can create such realistic illusion that even reality begins to bend to whatever image the psychic conjures. It could be really fun to play a character where enemies don’t know whether what happens is an illusion or reality. This works for any genre where there might be psychics.

One character I’d like to play is a bear with an Alternate Form that’s basically a human druid. This druid form would have Attribute Substitution to use Alteration in place of Might. In game, this would essentially be changing individual body parts (maybe his whole torso, maybe an arm, maybe just the muscles themselves, depending on the situation) back into his natural bear form, while keeping the majority of his body a human.

Not particularly inventive, but a classic. I like Prescience > Agility from a (NPC) character I made for a superhero genre game. The Gentleman sees many possible futures and picks which path to follow.

A parahuman with incredibly accurate short-term precognition. Though he isn’t superhumanly fast, he seems that way because he reacts to events before they happen.

Though he isn’t superhumanly fast, he seems that way because he reacts to events before they happen.

That one movie with Nicholas Cage.

This has sort of been an ongoing idea. So I think it would be cool for a character whose mind is so chaotic, that it’s beyond corruption. Like the Joker.
So I was thinking Attribute Substitution I (Deception > Will)

I like Will=>Fortitude myself. The character’s willpower is so strong that they do not succumb to injury simply because they don’t want to. Makes for a great character whose main trait is persistence.

It’s called next, I also did this but used it more like Spiderman’s Spidey sense

Substitute will for might or visa versa. Always seems like a cool concept for a hero’s will power to give them inner strength or that the hero is so strong that it just pushes through any situation, like the hulk. Attaching a flaw or merit to it would work well like warrior’s code, where you are able to summon up the strength because your training and code demand it. I like the idea of a samurai who pulls through, not because of his strength, but because of his will and honor demand it.

The first character i did in OL had a Energy=>Agility where the character used burst of fire magic propel themselves forward (Haste), disappear in a gust of flame (teleport) and do the Pasific Rim-style “elbow rocket” when making attacks.

Just give him (your prescience -> agility character) a precise/defensive weapon, and you’ve got yourself a Jedi!

I like anything to Fortitude because it only requires Attribute Substitution 1 to be fully useful.

I’ve written up a blood mage that uses Fortitude to Influence to represent their physical strength being the source of their mental control magic.

I’ve made a spirit bear that is Entropy to Fortitude to represent their otherworldly spirit energy being their “physical” body.

Mutualites are symbiotic microorganisms that attach themselves to the skin of the host species in locations where there is a lot of skeletal muscle tissue. They have invasive tendrils that burrow into the host that they use to consume excess heat, urea (via perspiration), pyruvate, and lactic acid formed during their host’s intense exercise. The organisms efficiently convert pyruvate and lactic acid into ATP, a byproduct of theirs that is returned to the host to be used as energy. This process increases the host’s skeletal muscle fibers’ ability to continue increased contraction, and allows the host more sustained vigorous exercise.

Mutualites have a protective chitin that covers their dorsal sides, while their soft ventral sides are secured on the host’s skin. Through chemical signals that the host’s body sends through nerve cells, mutualites can sense when there is danger to themselves and/or the host, and can detach from the host to intervene.

Here’s another awesome example from @lucidbeam!

Attribute Substitution and the Defend Action

For example, a sorcerer has Attribute Substitution I (Presence->Protection). The concept is that his force of personality is so great that he can cause his enemies to hesitate when attacking.

I made a presence -> entropy character, her death state caused actual suffering.
I’m also thinking about an learning -> energy/(or any other extraordinary) for a wizard who has learned all his spells by spellbook. That is in a world where magic is a thing that can just be learned and is not innate.

Check out this mischief:

Well Met Travelers, A few days ago, Owl posted a character concept of a rogue who intimidated people into not seeing him. You can find t...


Thanks to @Crazy_Weasel for this gem!

##Gunpowder Mage - Level 2 The black powder holds many secrets for those with the will and fortitude to unlock them. Not only will it grant you great power but it is also a key to the body and the mind. A word of warning, those who partake of the black powder will soon find themselves enthralled. ##Attributes Agility - 5 Fortitude - 3 Might - 2 Logic - 2 Perception - 2 Will - 1 Presence - 2 Energy - 5 ##Feats Attribute Substitution II - Energy - Alteration Multi-Target Attack Specialist …

This one is impressively well-thought-out!

Check out this Attribute Substitution idea from @Crazy_Weasel! 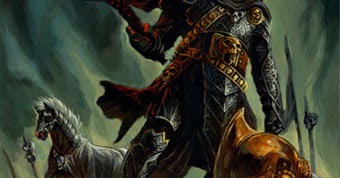 Well Met Travelers, Welcome to another of my Open Legend RPG Archetypes. This Time, I am doing the Death Knight Archetype. The Premise o...