The most cheapest way to role play

Since Open Legend is a free system, I thought I should share mine and encourage everyone else to share their own ideas of what would be the cheapest way one could play tabletop rpg’s.
And I just wanted to share my objectively best way to play rpg’s dirt cheap (sarcasm).

What would be the cheapest possible way to get in to role playing? Well here is my idea:
(The EVERYTHING IS PAPER METHOD)
first off before you continue reading I would like to share what I think would be some possible pro’s and con’s of this method and a brief explanation of what this method of playing is like.
As the name suggest, this method of cheap playing is by using paper and only paper, I’m talking about the type of paper you use for school like intermediate pads and yellow pads. But we do also use international 8.5x11 paper. We all probably use paper in our games in some way or form (heck we sometimes call these games pen & paper rpg’s) but this method asks that you use paper exclusively.
PROS:
So the pro of this method is that it’s paper, which means its efficient and incredibly cheap, replacable, and you can have tonnes of them and you probably have at least one at all times.
CONS:
the cons of this method is that paper is paper, they are not the sturdiest thing in the whole world and you gotta be careful with the paper miniatures and dice I recommend in this. They are fragile and are susceptible to wind. Be sure you have a good place to keep them.
Overall this way of play is only recommended if you really don’t want to invest tons of money on the hobby and are okay with only using the “low quality” stuff instead of the “good stuff” that we see all the time on youtube.

first we should start with what I think would be the most important thing, the dice.
There are quite a few gaming dice sets that are nice and cheap and you don’t really need millions of dice, but if you are willing to put in the work there is a cheaper method. Paper Dice.
you can print out printable dice, you can search for them but I’ll save you the time, you can print this out, it has 3 copies of every necessary die you’ll need and the dimensions of the file is that of international paper.
Just cut them out, fold, and glue them using a dry glue, don’t use wet glue, it takes time to dry and makes the paper wet and is basically just terrible.

File sharing and storage made simple

MediaFire is a simple to use free service that lets you put all your photos, documents, music, and video in a single place so you can access them anywhere and share them everywhere.

your end result should look like this:
insert photo

Next up is what system will we be using? obviously otherwise you would be literally just playing play pretend… With dice. Believe it or not there are actually some free tabletop rpg games you can play right now!
Obviously since you’re here you probably already know about this system; Open Legend!
There might be others you can try but I recommend Open Legend the most for many reasons:
the game is very simple and accessible it might be the best system to get introduced to the world of tabletop roleplaying, and the fact that its a GURP means you can play in many settings and have lots of fun with it for a long time.

This last part is optional and that is the things that you would be putting on the table, the grid and its tokens. Not everyone uses them and you don’t really need them but here is how we do it with the paper method.
First is the grid, now there are better methods but my method for the grid was to print out a grid where each square is about .5 inch big on an 8.5x11 international paper.
You can easily make this in an image editing program and print it out but if you can’t for whatever reason then here:

If you don’t have access to a printer but have at least a tool that can allow you to still draw a grid then do it.

now for the miniatures. I’ve heard people actually use food stuff for this, that’s just a bad idea, others say they use chess pieces which is less of a bad idea but not everyone has chess just lying around, and also, how do you keep track of who’s who?
in my method with the .5 inch grid I could use pad paper to make miniatures and walls

this is the easiest method for me, cut out this part of a pad paper 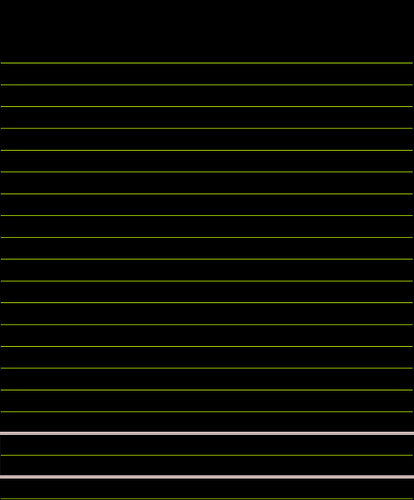 small mini503×607 59.6 KB
fold this paper in the center and once it has been successfully folded, fold the new center and repeat this process 4 times, unfold it afterwards and cut out the paper from every second crease, the end result should be 8 mini pieces of paper with a crease in their middle, that’s it, that piece should stand and look like this:

Now I highly recommend drawing a number on these mini’s why?
So you can keep track of them.
I wrote down on both visible sides PC(insert number here) for the players and N(insert number nere) for NPC’s that way we can easily remember who’s who. For example, PC1 is Gerald and PC4 is Michael, while N28, N5, and N6 are all goblins with their individual hp being kept track individually and we have a piece of paper keeping track of these by writing down the tag of the mini. These are universal minis, N2 can be a goblin, but it can also be a a rogue, or a king, or a commoner, or even a boar…!
This is for a 1x1 mini, what about 2x2’s? or 3x3’s? or 100x100?!?!?
2x2(or 1inch) - cut out 3 columns of the pad paper and do the exact same steps, only this time you have to fold 3 times.
You can probably figure out how to make bigger ones from here on so I won’t write down an entire table here.
Finally for walls, cut down 2 columns of a pad paper fold the center and then the new center and cut the paper on the crease giving you 4 pieces of paper, now fold them in the line of the pad paper and now you have a wall that is 4x1 in size, and can be placed in the grid or in the lines seperating the spaces of the grid. Simply fold the center a third time for a 2x1 size wall. These walls are again universal, they can be a dungeon wall or a house wall or anything really.
You can also add tiny crumpled pieces of paper for walls and blocks as well.

And that’s basically it, does anyone wanna share their methods of playing cheap?
Please share them because I would like to do a method that won’t make the entire battlefield be ravaged every time a slight wind sweeps the table. Cheers.

I mean, if you are already qualifying access to a computer and printing (say at a local library which is usually free for a few prints), then D&D Forge can get you paper minis.

That’s a pretty neat site. I use mostly mini’s I have collected over the years but it could be cool to make some custom mini’s from photos using that site.

intermediate pad is cheaper and making mini’s be numbers rather than actual drawings of entities means they are more flexible for me i guess.

if you already have the computer for printing and are on the internet, you can just use Roll20 for free, roll dice, draw on the maps, and would kind of be cheaper, since you are using paper or ink.