Hi, I know literally the first thing in the character creation is “there are no racial feats”. But how would you do it creating monsters? For my campaign setting I am creating some adversaries right now. But I came to a point, where I want to create templates for monsters rather than monsters of the same type but at different levels. But that would involve, that a member of a certain species will have specific feats (like “all aliens of this species can do psionic fear attacks, while members of that alien species can never do psionic fear attacks”). How would you do it?

I’ll share this evening an example of a monster from my setting that has different tiers and how I handle that, so maybe that’s helpful to you. 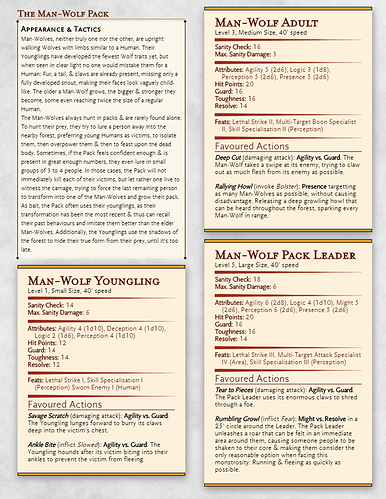 As you can see here, I established a couple of common traits that I wanted to keep consistent through all of these, but also have a couple of traits, that I wanted them to improve on as they progress further and further, while also trying to give each of them a unique ability or function.

I hope this helps a bit at least.

Looks good, think I get how you did it. But you are creating a monster with different tiers. What I wanted to do is creating a monster template (and maybe a few example tiers), but ultimately giving the GM the opportunity to create the monster at any tier he needs, just by applying the template I give him. A bit like you do in Pathfinder when you create a vampire. You take a monster and apply the vampire template, which adds specific features.

Ah, I see. I would stay away from that kind of design, as I find it unnecessarily complicated and often convoluted. I think it would probably take more time to apply such template correctly to an existing monster than just creating the new version from scratch, because one could easily be bogged down in details.

I think even Pathfinder designers would agree to some degree with me there, as it looks like they have moved themselves away from such design, as they have toned this down considerably in PF2 so far.