Katsu on Discord asked: So how do you GMs plan games? Do you make like a main outline or do you just make a setting and wing it??

Thought this would be a good topic to present here, and if you responded to the chat, please do so below as well.

After NPC creation, and making the decisions for setting (which will be a separate post), I have a very general story outline that includes potential quests for players.

For a single game session in a campaign, I use one page of notes:
Top of page is a very quick outline of decisions players made last time, and/or have left over from last session.
Middle of the page is names of NPCs for use in the current session, and maybe a brief description of them as I like to do voices.
Bottom of the page is a list of 3 -4 things total:

Then I plan on everything to be thrown out the window.

That last part is the most important

I answered on Discord, but I thought I’d add something more in depth here. I use a style of GMing that’s known as being the MC (Master of Ceremonies) and involves creating the world and the NPCs and then reacting to what the players do rather than having an overarching plot planned. The overarching plot tends to simply materialise, and ends up way better than anything I could have written myself.

That’s it! I know that looks like a lot, but I only have to repeat the last two before each session. They say a good GM spends an hour of prep per hour of play, but with this method I manage to get my prep done in about ten minutes. It’s heavy on the improv skills, but if you can handle it then the emergent story makes it worth it.

My last game was set in a post-apocalyptic world, and the local map was filled with settlements to rival the one the players controlled, but the plot ended up being mostly about the bard’s quest to find the music that would fix the world (and not many characters realised that his version of fixed was not necessarily good for everyone).

I also put together a long list of setting-appropriate NPC names so I can put a name to anyone they interact with, in case they become a major character.

I’m a huge fan of this!
I like to make a document I call a Name Bank.
In that document, I have a bunch of names for every kind of character, buildings (everything from Inns to Castles to graveyards), small towns, big towns, organizations, roads, terrain features (lakes, rivers, hills, forests, etc.), and everything I might need a name for.

if you guys haven’t heard of yEd, it is an amazing and FREE tool to help you track relationships and things that belong together. It’s pretty easy to use too. yEd is a free desktop application to quickly create, import, edit, and automatically arrange diagrams. It runs on Windows, macOS, and Unix/Linux.

here’s a complex example built up over several sessions, don’t be intimidated by it, you can start it nice and simple: 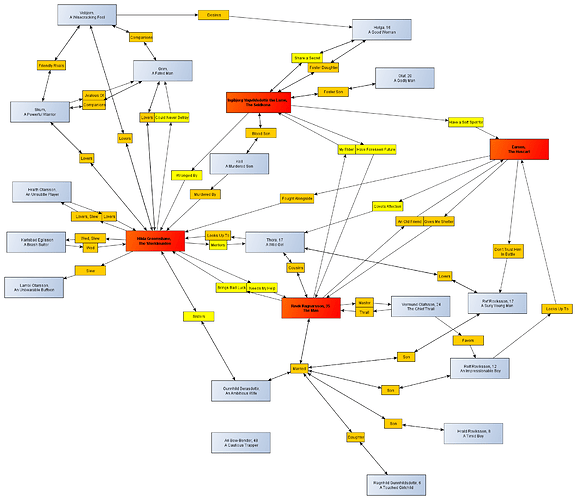 FYI, the above is not done by me, but from a game I watched on twitch

Ewww someone is lovin on his father’s cousin!
Ref Roviksson and Thora

heh, yeah, that’s saga’s of the icelanders, it is weird on how it interacts. But culturally and back then, it wasn’t considered that. Joys of RP’ing

Curious if anyone has tried Mindmeister or other mindmapping software and how they feel it compares to yEd? Seems similar in concept at least.

I’ve used Freemind (which is free and open source) for mapping out stories with overlapping plot lines, several times, if that’s any help.

If I ever learn enough to GM, I might try using ywriter (novel writing software) to keep track of the story and for notes. It doesn’t work on new devices, as far as I know.

I’m currently using View Your Mind to map out my online course.

It’s available for Linux only though I think

Never thought to use it for planning sessions…hmmmm… 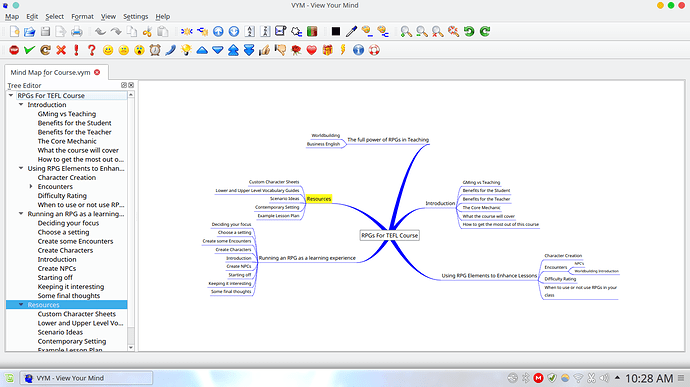 I just started filling out a campaign I thought up. Not that I know anything useful at this point, other than storytelling. I put it in ywriter because I find it easy to keep notes such as characters (with pics), and using chapters, scenes, locations, items, etc.

I used the outlining and the writing part, I could add the notes of what the players actually do.