Hi all!
As some of you know, I’ve been working on the Open Legend Fantasy Bestiary project for several months now, and I am pleased to tell you that a playtest book is complete with 100 different monsters that you can use in your Open Legend games!

Here is the link if you wish to support the campaign and help us make this the best book it can be: https://www.indiegogo.com/projects/open-legend-fantasy-bestiary-books/x/18535727#/

Here is the link to the playtest Bestiary: http://homebrewery.naturalcrit.com/share/H1G-aG51Q

cool thanks! I’ll use this in my upcoming game.

Awesome job, thank you so much. Just curios I noticed the hill giant is absent from the giant section, was wondering if this was intended or a minor oversight?

This is amazing book, I pledged for it myself, Also i did find a typo on the Wraith. Its attack is agility (2d8) but its entropy that is (2d8)

The hill giant is absent by design. When the lore for giants comes out, you’ll see why.

I’ll fix the wraith throughout the next couple of hours. EDIT: fixed.

Just some general feedback. I think too much room is given to stats. These creatures are meant for combat and thus should only have 3-4 stats. No need for a secondary label taking up space and a bunch of additional stats that won’t be used and take up a lot of space in a block.

This is opinion, do with it as you will (I still backed to support it).

For usage in combat, it’s enough to just look at favored actions IMO. Even though they’re currently just stat blocks, the creatures are not made for combat alone. Each GM can give lore to their monsters; some will change the stat blocks to fit their vision better, some won’t, but the option exists.
For example: Balor is a powerful, ancient demon, a force to be reckoned with. His secondary Logic and Will stats pay homage to that; it’s an extremely intelligent being with a strong force of personality.
Hopefully this clears it up.

I don’t believe he was advocating removing these stats, but to have the stats in the general information “article” or paragraphs, and leave the stat blocks just to things that are applicable to combat specific, as when you are doing combat you want to see the things you’ll use most.

That’s the feeling I got from what he wrote anyways.

Ah, I understand.
My impression so far was that’s what the favored actions are for, are they not?

Ok, so I hadn’t looked at the stuff for awhile, and now looking at it, I see what he is saying.

Your stat block stakes up nearly half a page, which is huge. A lot of the space is taken up by the Attributes section, and that each attribute is on a sperate line. He was just recommending a way to take up less space.

The way I view one of these “stat blocks” or “info boxes” is that they contain what you need at a quick glance. @ucffool was just sugestion pulling some of that out.

Favored actions are just there b/c a character sheet only has so much room, so you put the main things. For combat and an NPC, you aren’t going to have nearly as many things you’ll do compared to a player character, so typically there are only a few things to do b/c of the nature of combat being quicker for OL. You could easily list more actions for an NPC, but for the “stat block” you want to keep it simple. The rest of the text area is where you could include more actions as well as more Attributes and info.

HOWEVER, as they put it, it was only a small recommendations from them. It isn’t 100% you must or need to do this. He does heromuster, and so put some of this thought into his random NPC generator for example.

It’s hard to say what to put where and why in these things, there really isn’t a “best” b/c people play so differently.

You can look at the wiki and how I designed the info block for characters. I put in more spots than I really wanted, but mainly to have the flexibility for the format, which is a wiki. You can look at the Amaurea’s Dawn and how it was listed there (I’m not a huge fan of the stat blocks there, but they work).

A comparison of 2e vs 5e. Different info slightly bc slightly different mechanics. Overall it is all there, but presented differently. Plus a lot learned in the years for layout and design. 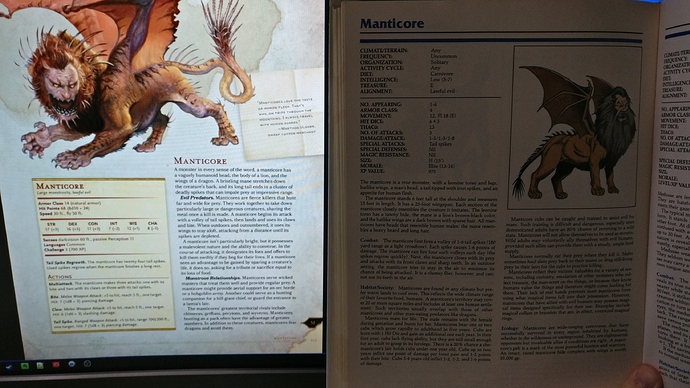 What would your suggestion to do be then?

Well, number one, do what works best for you and your group.

If you are going to keep all of it, I’d maybe re-arrange it like this:

obviously that is very rough, and I haven’t worked with the program you are using, so not sure how easy it is to rearrange the things to look like this.

I would probably move the “Speed” up to be under the name, like right under “Level 5, BOSS monster”, have on the next line say “10 ft ground, 40 ft swim”

Then I might put Hit Points, Guard, Toughness, Resolve across in a line, and below each have the value, like what i did with the attributes in the picture.

That, however, is ME, and my preference to save space, it may or may not look better overall.

Design layout is hard man, and there’s a million people with a trillion different views on it, so, again, do what works best for you, and what you feel gives a good aesthetic and feel for the whole thing you are producing.

I mean, I personally like the layout as is, and have used it in my home games since I began working on this project.
If more people complain, I’ll change it up.

I’ve been using the stat blocks without issue. That’s the hobby we live in though - each GM has a preferred way of doing things and consuming information.

I can take the layout as is, but if you changed it in the suggested manner I would adapt.

Thanks for the massive amount of work doing this. I have two groups in the same setting and one group runs Open Legend with the other 5E so this bestiary makes a lot less work for me!