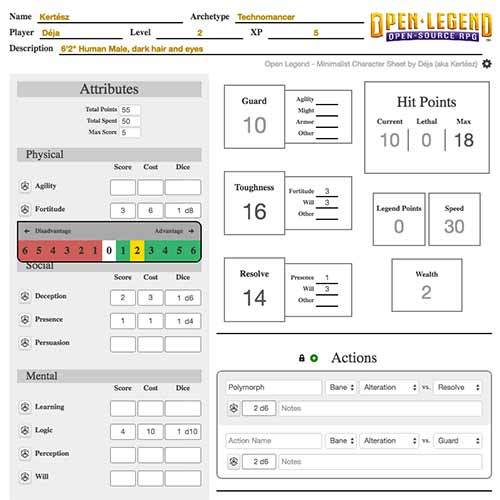 This is definitely not meant to replace the excellent Roll20 sheet that @Great_Moustache put together. Unfortunately, it just wasn’t a sheet that worked for my group, so I crafted a new sheet for my group to use. However, once it was done, I wanted to share it with the community, in case there are any other minimalists out there who like the feel of dice pouring from their fingers.

So far, it’s only had limited playtesting, and even from that there are already a few tweaks that are on my list (see below), but I’d love to get your feedback. If you try it out, please let me know if you find any bugs or if there are any features you’d like to see in it. I can’t promise I’ll add the feature (the whole point of it is a minimalist approach) but I’ll definitely see if it would fit.

It’s a good sheet. Helped notice a bug before it got merged on the github

Plan to “steal like an artist” on a few things from it for the other sheet too!

I’m starting my party on this sheet Friday, will let you know how it goes!

I LOVE the advantage/disadvantage mechanic on this sheet. It’s lovely. The whole sheet has a clean, streamlined feel that I really enjoy.

One thing that’s really missing here is the Initiative and Init-To-Tracker button that Moustache’s sheet has. I realize it’s just an Agility roll, but having that and being able to sub Agi for another stat via Attrib Sub and having Adv/Disad would be nice. Maybe put it on the right with a drop down for attrib selection?

Thanks for the feedback, @Ultralazuli!

I’ve been planning to do some work on the character sheet over the holidays, so your timing couldn’t have been better. I’ll definitely add that to the list

Glad to be able to help. I’m really looking forward to how it might be implemented in the future!

Hey there! Going to be using this sheet for my campaign, and while I like the non-minimalist one, it’s not as clean and organized as this one. I was wondering if it is just me, but it seems the Actions section has a bug for determining power level of a Boon. If you leave the PL section empty, it assumes PL 0, but if you put any number in there, it ends up just being blank.

Some suggestions, because I love the sheet and would love to see more implemented:

None of these are necessary, but I feel would make the sheet a little easier to use

I’m afraid that the creator of the sheet hasn’t updated it in quite some time, and it currently isn’t able to handle advantage/disadvantage higher than 6 which has resulted in some problems for a different group. It’s a good sheet, but both versions are made and maintained by volunteers so it happens sometimes.

A user by the name of bioa10 on our Discord has just (literally yesterday) picked up development on it, but it may take him a while to get up to speed on how the sheet was written and I’m not sure what the process is for updating a sheet that someone else made.

It’s worth noting that all of the features you suggest are already in the normal version of the sheet. It may be quicker for you to make suggestions for the looks of the normal sheet rather than the functionality of the minimalist sheet. @Great_Moustache would be the person to get in touch with, though he is also quite busy at the moment.

A shame indeed! The problem with the non-minimalist sheet would be asking him to reorganize and design it all again. Which is quite a lot to ask for. And while it is a lovely sheet, it’s just not lovely to look at. No offense meant. I do appreciate the work that went into it, just much prefer this look and the fact that it uses repeating sections.

I really sound like a stuck up brat! I did get spoiled a bit with the PF sheet…

It’s not a problem, the look was meant to match up with the official paper character sheet (at the request of the author of the Core Rules) and since it being designed that way functionality has taken priority over aesthetics. We’ve heard as many complaints about the looks in the past two days as we had since the sheet was created (any idea what’s brought that on, or is it coincidence?). You can post any suggestions here:

Since this applies for both Player and GM resources, posting it just in the Resources section. Hello all, I created and have been updating the Charactersheet on Roll20. I thought I’d actually make a post on here so that people could discuss it. Feel free to talk about something you’d like to see, additions, subtractions, etc. You can go to the following link and view the changelog, as well as the files: Below this point, you will see what updates/changes are planned, as well as what the l…

@TrinitysEnd Even if you think it’s too much to ask for, some constructive criticism would be hugely helpful, given that we haven’t yet been able to get a straight answer out of any complainants except for “I don’t like the looks/layout”

and the fact that it uses repeating sections.

The other sheet does use repeating sections for everything except inventory. It’s that what you are referring to? I didn’t for that bc 20 items max, plus easier for auto calculation for max carry to change your speed.

There are other repeating fields I added for notes and such, and all the sections you can also choose to not show with the sliders at the top of the sheet. I do plan to make that interface better. I’ll be back on the 27th and plan to do some work then.

Yes, I do mean for inventory, I’ll pop over there and try to explain a few problems with the aesthetics of the sheet. I think a lot of it is based similar to that of the 5e sheet, especially with how attacks are handled.