Below is a reference sheet I worked on for myself and my players, focusing on a more compact break down of all rules likely to require ongoing reference.
I also tried to-where possible-include some of the extra rules fluff I felt helped set this RPG systems tone (and would help aid newer players expectations). 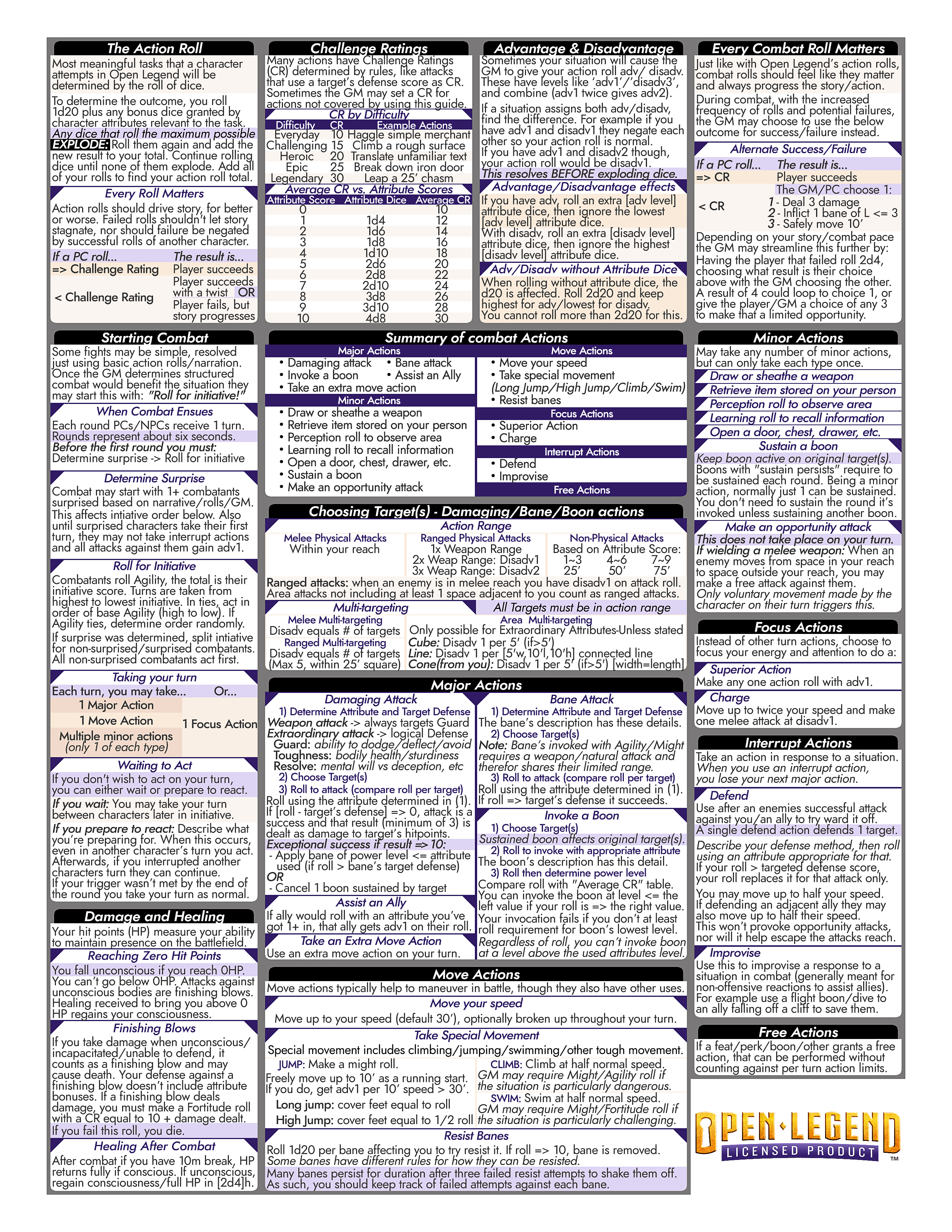 I’m really happy how it turned out as this accomplishes my main goals,
so hopefully it would help you too.
Beyond a compact break down, the focus of this was to give the minimal but full rules required for engaging with the game at the earliest stages.
For example my players enjoy board games etc but can be intimidated by too much information. So things like experience/lethal damage/legend points, that can be introduced after more experience with the system and generally on a need to know basis/with direct interaction with the GM anyway, I chose to not include (luckily, as there was no room left haha).
One important factor to consider: I hunted and compared various fonts to make it as readable as possible, however it is compact. As such, though myself/players with glasses are able to read it well enough on paper, larger alternatives I’ve seen may better suit the GM screen with this as a possible separate aid.
Rules Note: The bottom half of the ‘every combat roll matters’ is just an optional house rule, included for my players that prefer that to choosing every time.

There’s still things a GM from what I’ve read/seen would likely need, like I’d want at least the ad hoc damage table as a quick reference. Also a summary of all the attributes and their definitions (which I’m including with the character specific sheets for the players in my case).

As I mentioned though, hopefully what’s here can be of use for others too

Also it’s not quite as easy to read, but here’s a grayscale version you may prefer

It seems like a good collection of information, it just a rough first look without a place for the eyes to focus, so easy to be overwhelmed with knowing what to focus on at first.

Overall it seems to do a good job of providing all the information that you said you wanted on there. Given the limited space I’m not sure you could do anything to help with spacing, nor that it is actually needed in this case.

Happy to hear that

.
Thanks for mentioning it being rough to look at from the start-I just added in a breakdown of how the document flows to help with that (a discussion I would have with players at the beginning but forgot to share here).

I believe there’s a typo in the Advantage/Disadvantage Section.
It also looks pretty cramped, but I think it has all the important information on it.

@Brycelor
Really happy to hear that, thank you ^^.

@Lithimlin
Could you possibly point out the typo if you notice it again?
I read through it multiple times just now and couldn’t see anything out of place.
Regrettably that particular section I ended up editing and saving over for a new rules area before realizing. So I can’t just copy/paste the text into a program that would check for typo’s. (I will be able to edit over a spelling mistake though).

Yeah I understand how cramped it is, but it was important to me to get all the necessary information and rules (without needing to re-reference the SRD for clarifications etc) during play. Not the best size for a screen but hopefully it helps players/GM’s as a full reference point for early games.
Glad it looks to have everything important for you there

For the disadvantage it also says to keep the lowest dice.

Ohhh right. I was looking for incorrect spelling not incorrect rules, thanks a lot for letting me know-one of those copy+paste’s gone wrong.
Shall fix A.S.A.P. and edit this post when it’s fixed.

EDIT: Thankfully that would be an easy thing to recognize in-action, but it’s fixed now (updated images in OP) and appreciate you catching that this early.