I ran my first ever "real" dungeon crawl! And a lot of dead body abuse ensued

Recently, as in literally only a few hours as of me writing this, my party ran our first ever “real” dungeon crawl.

I love dungeon crawling! But sadly, my player (singular, only 1 player 1 gm party) doesn’t seem to hold the same opinion. That’s fine, to each their own, I understand.

However, recently, as of this month, we got something that made me want to try doing conventional dungeon crawls again. Couple that with my being more experienced now, and I gathered the confidence!
What was this new thing we got?

TECHNOLOGY!
We are no longer cave men…! The age of pen and paper is over for us!

And so… In the span of a few hours, I mustered my creativity and courage to create a small test dungeon!
Which wasn’t my original plan! The mission they’re doing is supposed to lead them to a large dungeon but now, they’re in another dungeon… Which I guess is great for me!
Test out a small dungeon first! If they like it, great! If not, that’s alright too! (plus I sort of still didn’t have the dungeon finished yet…)

I looked at the dungeon once completed and doubts started to pop up… I felt the dungeon was a little hard, cruel, and even unfair, like rage game type unfair.
Namely I was focusing on the traps I had set up. They were all well concealed and all had very convoluted solutions for disarming. Not to mention deadly!
One room is locked by a locked door (a trap to make them believe it’s locked because it contains something good, encouraging them to want to enter it.)
When you actually unlock and enter the room, the room is empty and traps you inside to drown you by flooding the entire room with water, with the only escape being a convoluted button puzzle. The buttons are on the ceiling forcing you to wait until the room is already covered in water before even getting a chance at survival!
Unfortunately, I had no time to re-create the dungeon. I just had to hope.

It was finally game time. It was the moment of truth, swallow my fear and pride. I was prepared for the worst.

And fortunately unfortunately for me…
I failed my task incredibly successfully…

It took a while, I had to teach the player first about the program since we are sort of new to this.

But once we finally got the hang of it and started the crawl… Hilarity ensued.

What I thought was gonna be unfair, unbalanced and difficult, turned out to be a joke. Why?
Because I forgot to take into account player creativity/stupidity? (I still can’t decide) and player options.

I forgot they could turn invisible.

Upon encountering the first enemy of the dungeon: An actual human man, who’s seen better days! He was practically a zombie!
The player didn’t hesitate to go for the quick stealth kill!
Incapacitating the foe and knocking it unconscious before it even knew what happened.

And it was with this unconscious husk of a man, where the hilarity would ensue.

A quick perception check later revealed a pit trap for the party. Player really wanted to know what was at the bottom, so he went back to the not dead dead guy, and carried his body, slowly and silently all the way back to the pit trap, for what purpose?
To throw the frickin’ guy in!

Thus creating, the winning strategy for them.

A few rooms later, some sleeping guard dogs were found and just as easily and quickly dealt with.
Giving the player more dead bodies!

And so, the dead body of poor dogs and zombie men began, as these poor souls would be used to test every nook and cranny of the place from then on for traps, essentially turning into their live but not live bait or decoy or whatever you wanna call it.

Remember that water trap room? Upon unlocking the door, the first thing they did was throw one of the dead bodies inside, triggering the trap as it was pressure plate activated (the entire floor was the pressure plate) before they could enter the room themselves.
Letting them know that the room was nothing more than a lie, as they hear from the other side water starting to flood the inside of the room. They laughed maniacally.

I was amazed, horrified, and most importantly, I was disappointed yet proud.

The dungeon turned out to be a piece of cake, and the dungeon crawl, while still not done, ended up being honestly fun for them.

You can view the vod if you’re interested. I’m actually archiving all the recordings of our play sessions on YouTube now. Recording my games has always been something I did, but I only ever kept them on my drives. I’ve been forced since my storage is starting to clog so here I am. Upload speeds have also sped up recently so doing these has become more tolerable and feasable for me. Content warning, there are lots of no no words and other such things in these videos, so if you don’t like those, stay out.

That said, here’s the link: 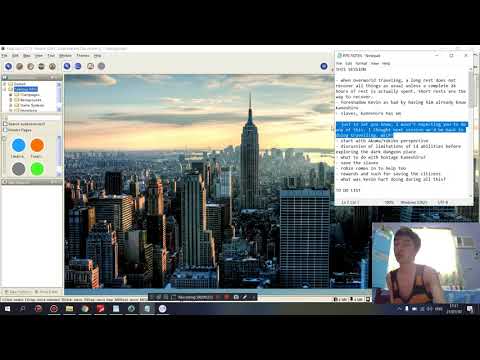