Another short GM tech here: sort of a house rule, sort of a way to run the meta-story of a campaign, and once again taken from Apocalypse World (which is where the name comes from). Love Letters are a way to catch your players up to events which happened when they weren’t there, either because they missed a session or because of a time-skip in the game.

How to write a Love Letter

The purpose of a Love Letter is to inform a player of what happened to their character while they weren’t there. It’s a useful tool to have if a player misses a session but you still run it anyway, or if it’s been a long time since the last session and you want to get the whole party back up to speed, or if you want to introduce a time skip into your campaign. When the player(s) show up to the session, hand them a Love Letter and let them read it while you’re setting up.

You’re informing the player about what their character did, but it’s important not to take their agency away. Don’t have their character do something they wouldn’t normally. Try and follow-through on something they were already doing if possible, or offer them a choice. I usually like to ask the player to make a roll and base the outcome of what actually happens on how well they roll.

In the last few [hours/days/weeks] you have been [plan the player was working on / consequences of event with the main party / event that happened off-screen]. How did that go for you?

Messing with the formula

To retain some player agency over their character, I like to offer the players some choices of results even when asking them to roll rather than choose. You don’t have to make the consequences obvious if there’s secret stuff going on, but you should at least explain the goal they’re going for. Don’t ask them to choose between left and right without explaining that left will lead them to a magic sword and right to a new ship.

Here’s (an edited for clarity version of) a real Love Letter I wrote to a player whose character was a medic. The party were members of a gang run by another of the players, at the end of the previous session they were just about to roll initiative on a fight with a rival gang, so the Love Letter was about what the medic was doing that meant they couldn’t be involved in the battle.

You went with Diamond (another PC) and her gang to go deal with Pierre’s crew (NPC enemy), and while the fight was happening you had a run-in with Dust, a nasty piece of work and Pierre’s pet saw-bones. He leapt out of a shack and pushed you off your bike as you passed through an alley. How did that go?

Roll Agility. On a 15+ you got away unharmed. On a 20+ you also snagged some of his gear, get 2 medical kits. If you roll less than 15, he left you with a nasty wound, take 5 lethal damage.

The rest of the fight went well, none of the gang have any serious injuries so you thought you’d have it easy until you came across some tied-up people Pierre’s crew left behind. They’re in bad shape and bleeding, but don’t seem to have been stabbed or shot. What’s up with that?

Choose one of the following:

Whatever the case above, you’re now out in the wastes, camping overnight before Diamond goes to raid the fort. You have 1 med kit with you, plus any you stole from Dust, and a strong suspicion things are going to get messy in the morning.

You’ll notice me using a couple of different methods in here. When the action was desperate and there were few possible outcomes, just ask for a roll and tell the outcome. When there’s a lot of ways it could go, ask the player to choose but don’t make one choice obviously better than the rest. Feel free to mix and match, or come up with your own ways of formatting. Best of luck if you decide to use this method!

I don’t know that I would put “Love and kisses” at the end myself, but otherwise a very good idea!

It’s an homage to the original idea from the Apocalypse World MC’s Guide, you can obviously sign your letters however you like

Worth noting though, it’s the GM writing to the character not the player (again, you can change that if you like but it’s how the original is formatted). I’m not giving love and kisses to the real person sat at my table, I’m giving it to the fictional character. I’m making interesting stuff happen to them so they get the chance to be awesome, what could be more loving than that?

Here’s the original examples by the way. I’ve expanded on the basic premise over the course of several campaigns based on what I found useful to me. 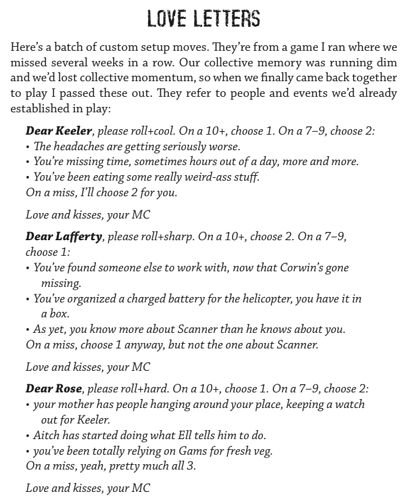 Oh this is incredibly clever! I’ll consider this the next time one of the players isn’t available or the “season” in my campaign has ended and there’s an epilogue to be done!