Just sharing this here, you could call this a proof of concept or an Alpha version. I’m working on it primarily for, myself but if others are interested then I’ll post updates as I work on it.

As a DM I found it a little disappointing when my players would say things like ‘I want to invoke persistent damage’ knowing that they were a fire mage or assassin. I always thought if I was in that position I would give my spells/actions names to add flavour, ‘I want to cast enflame/venomous blades’ for example

As luck would have it one of my players is currently running a game so I’m trying to lead by example and name my spells as a player, the other players seem to enjoy it and I’m hoping I’ve inspired them to try the same in future.

However a problem I ran in to is that the ‘actions’ panel on the character sheet only has one section for ‘name’ - you can either list the Boon/Bane or the Spell Name you’ve invented, there’s not enough room for both. This is fine 90% of the time, if you’re a fire mage you’ll probably remember that ‘Incinerate’ is Persistent Damage. But my character has a bunch of Prescience Boons and some of them are very hard to name without getting your wires crossed - Reading, Precognition, Detection etc. They’re all very similar in terms of theme so it’s easy to forget which is which unless you just name the literal boon rather than giving it a spell name.

This isn’t the end of the world but I really like the additional flavour that naming your actions brings to the table so I started working on this: 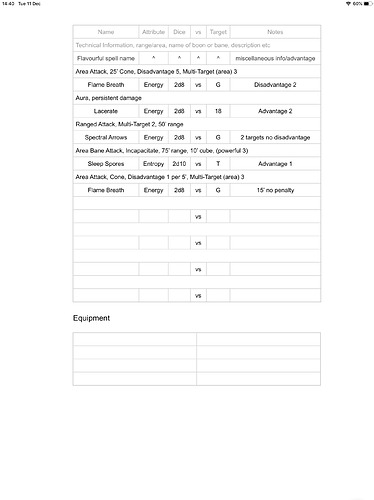 What This Solves At a Glance

Don’t read too much into the actual examples I gave, I was just writing them out to show the function of the sheet. I used ‘flame breath’ twice to show two different ways of writing essentially the same information, one being more set in stone, the other allowing for adaptation on the fly by including the disadvantage information.

The large open cell can be used to write all the technical information and the smaller individual cells resemble what’s already on the actions panel on the front of the sheet.

So as I said this is an ‘alpha’ version just to explain my issue and a potential solution. What I want to do going forward is:

So yeah, this post got very wordy which I didn’t intend but I wanted to explain my motivation, I’m probably going to make the changes I’ve suggested above for my own use and my group but if anyone on here is also interested then I’ll keep you updated and share the files when they’re ready.

This looks great! I’ve been solving this usually by putting the bane/boon in brackets after a flavourful name, but this is a lot cleaner. The one thing I’d change is putting the rules for the action below the name and information. It emphasises the name and is more natural to read that way (in the examples you have, I spent 30 seconds trying to work out why Spectral Arrows was an Area bane attack).

This looks great! I’ve been solving this usually by putting the bane/boon in brackets after a flavourful name, but this is a lot cleaner.

Thank you! Glad you think it serves a purpose and it’s not just me being pedantic haha - I tried the same thing but it’s definitely a squeeze getting all that information on there.

The one thing I’d change is putting the rules for the action below the name and information.

Completely agree now that I look at it again, that’s a simple enough fix. I’ll incorporate that when I move into Photoshop : )

Ok so I got into Photoshop and started having a play around. I ended up changing the Character Sheet itself (I’ve also changed the title of this topic to reflect that) to compliment my alternative Actions Panel.

Here are the sheets: 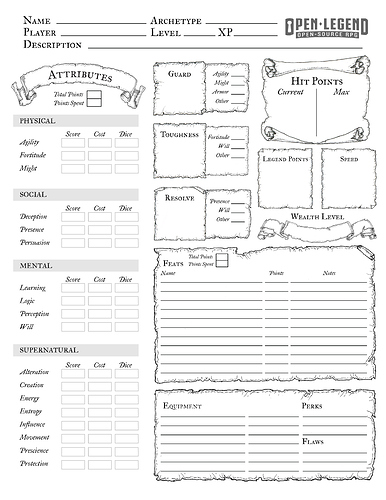 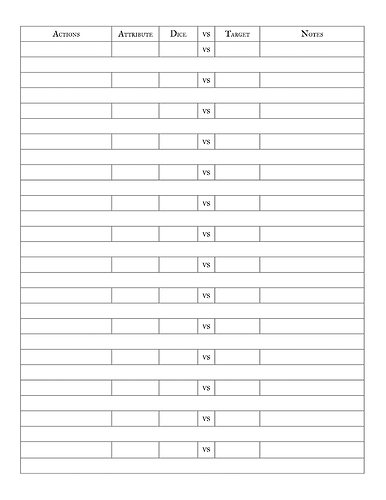 Changes From the Original

Changes I made to the official sheet:

Let me know what you guys think, overall I think it’s a shame that I had to make the sheet two-pages, there’s definitely an elegance to having it all on one sheet/side but I think the added utility this layout provides is a worthwhile trade-off.

Maybe one day I’ll try down-scaling the Guard-Wealth Level section of the sheet to allow a smaller actions panel to fit in somewhere but I doubt it would be as thorough as the one I’ve created for the back.

I can only like this once… what a shame. Great work and thanks for the new sheets. I’m ok with 2 page sheets most RPG games require it. To be fair I would maybe cut out some of the action section to have a section for more details on equipment

Thanks man! I hope you and the other folks on here get some usage out of this.

I also wanted to add more room for the equipment but actions really were the priority with this, I wanted people to have the freedom to not only write down all their spells but potentially even different variations/combinations so I felt that I had to maximise the number of rows available.

I might take another look and see if there’s anything else I can do to the original sheet to create more space but the way I see people using the equipment panel is just to take notes of their important or enchanted gear, not necessarily every item they’re carrying

I always found it weird that Lethal Damage wasn’t in the Hit Point area of the character sheet.

I always found it weird that Lethal Damage wasn’t in the Hit Point area of the character sheet.

Just not looking at the right character sheets

These are really cool. I am going to try to use these at our next session but might be hard to implement due to everyone using hero muster.

Good work on these they are nice.

These are really cool. I am going to try to use these at our next session but might be hard to implement due to everyone using hero muster.

Good work on these they are nice.

I’m currently moving my character to one of these sheets ready for tomorrow’s session, looking forward to trying it out!