Hello all! Posting my Baba Yaga boss that I used a couple of years ago in a Halloween oneshot. This boss was used against a party of 5 level 5 characters and she was a fairly difficult challenge. I took the D&D 5e mechanics of lair actions and had the fight take place in Baba Yaga’s giant walking chicken hut. Feel free to use her how you like! Would love feedback on her, too! 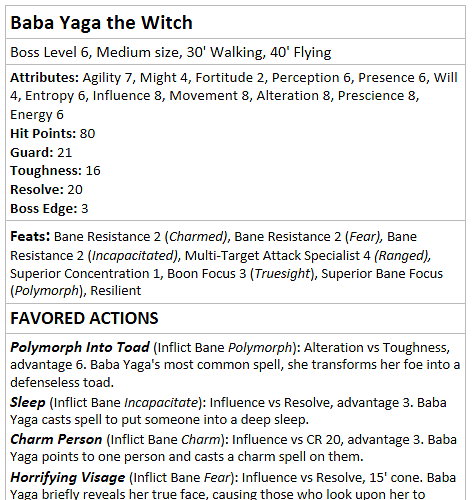 SPECIAL
Lair Actions (Initiative 20)
On initiative count 20 (losing initiative ties), Baba Yaga can take a lair action to cause one of the following effects, but can’t use the same effect two rounds in a row:
Giant Chicken Claw: Baba Yaga causes her pumpkin castle to attack one of the players with its claw. It has an agility of 5 and makes the attack with advantage 2.
Walk Through Walls: Until initiative count 20 on the next round, Baba Yaga can pass through solid walls, doors, ceilings, and floors as if the surfaces weren’t there.
Seal Shut/Open: Baba Yaga targets any number of doors and windows that she can see, causing each one to either open or close as she wishes. Closed doors can be magically locked (requiring a CR 20 Might roll to force open) until she chooses to make them unlocked, or until she uses this lair action again to open them.
Banishment: Baga Yaga can choose one creature she can see and attempt to banish them. She makes a Movement roll vs the target’s Toughness. If successful, the target is banished to a prison demiplane. Otherwise, the effect ends on initiative count 20 on the next round. To escape, the creature can use its Major Action to make a Resist Roll. When the effect ends, the creature reappears in the space it left, or the nearest unoccupied space if that one is occupied.

Instead of having player’s just sitting out if their character died during the one shot, I added this ability to Baba Yaga when they encoutnered her at the end. Their character would remain alive, but a portion of their soul would be captured by her and used against them in the final battle.

Tactics: I only used her inside her hut, so her tactics consisted of opening up with a mass fear bane, and then using hit-and-run tactics from that point on. Her lair action Walk Through Walls was probably one of the most powerful abilities she used, as she could buy herself a lot of time or sneak up on characters as they wandered about her hut.