Hello, one and all!

I’m new to OL, but the system excites me immensely. Mainly because it has all the tool I need to build a character I’ve always dreamed of - a true wizard, Reality Bender!

Thanks to the received feedback, I was able to (hopefully) improve the character. I’ve also been made aware that my choice of Companion II feat requires some clarification. Basically, aside from mechanical benefits, it’s there due to the character’s backstory, which, in short, goes like this: “once a power-hungry wizard had an epiphany and understood that a mortal mind has a limit on how much magical lore it can contain. So he performed a ritual and shoved part of his knowledge into his familiar, thus transforming the beast into a magical creature and freeing a portion of his own mind to be further filled with lore”.

Here are links to the main character and his familiar: 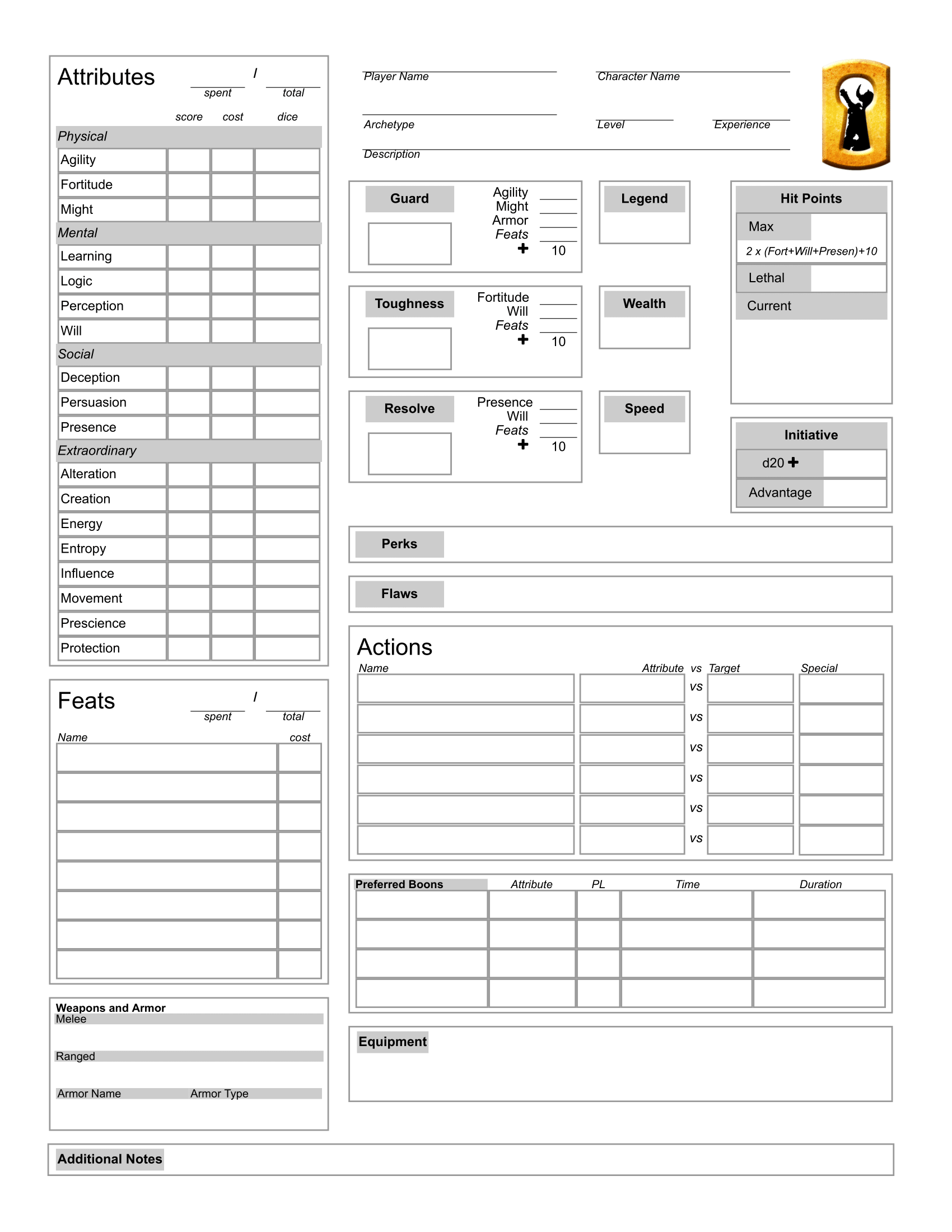 Theron, reality bender (level 1). A gray-haired man of indistinguishable age, with piercing blue eyes and tattoos all over his body. Built for Open Legend RPG. 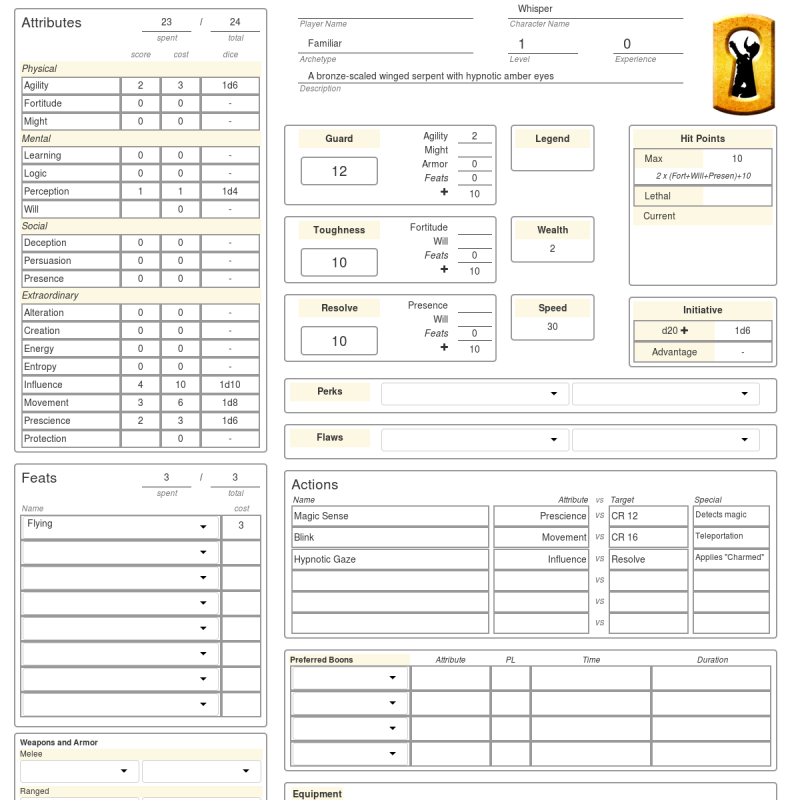 Feel free to comment on the build. Looking forward to discussing it with the community.

Well in one of my games that i will be dm-ing, there is a player who specialised in magic, and took the alternate form 2 feat that baiscly turned him in a non magic character with allot of might and hp. You could do the same. Just an idea.

Reality is very wide concept. I understand it as a mix of time, space, energy, spirituality, matter and philosophical negation of the elements above. If you are looking for versitality, then alteration is a key. If you want to bend elements, pick energy.
I’ve built mage before and I recommend you picking at least 3 points in prescience due to magic sense. Protection is handy if you plan sealing demons and creating shields. Movement is helpful in things like telekinesis or matter bending.
Entropy 'd be fine to use as a counterspell.
Influence bends will of living creatures.

That’s a neat idea, actually. I was thinking about something along those lines, also. Although I’ve set my sights on the Shapeshift boon. Though very GM fiat-dependent, it seems to be extremely versatile. Plus, it makes use of my character’s already high Alteration attribute and frees Feat Points for other feats.

Yes, I’ve already picked up 5 in Alteration. As for Prescience, my familiar (Companion II) takes care of that. Protection seems to be too limited, I have to say. Aside from Nullify, it has nothing that couln’d be replicated with Alteration and Creation.
Movement is the biggest dilemma for me. On the one hand, Telekinesis and Teleportation are neat. On the other hand, these are the only Boons that are truly unique to that attribute. I’m thinking about letting my familiar handle it.

Protection is not only for Boons. You can use it as defend action or improvise. and unlocks lots of defensive feats.
About movement: you need to decide whether you want be jack of all trades or focus more on an actual reality bending.
If I were you i’d focus on alteration first, and then focus on two side attributes, i’ d pick protection for defence and movement for telekinesis only. The problem with this build is lack of offensive attribute. But you have a companions, right? Not only your favourite owl, but other players

Haven’t thought about using Protection for defence action. Thanks for pointing that out!

I don’t like having no offence, though. After all, breaking things is much easier than transforming or creating them. At least 3 in Entropy is a must, I think.

One way of achieving this is through Companion II feat, which basically gives you a secondary character, who can pick up extraordinary attributes not available to the main character due to the attribute points shortage.

I think I must be misunderstanding here, but above it sounds like your idea for the character is for them to be widely versed in different kinds of magic, whereas in this part about the companion you make it sound like you the player are actually the one trying to get a wide variety of abilities.

Why would a character who wants to know as much different magic as possible be like “I don’t need to learn these schools of magic, because my familiar knows them”? And if that’s actually how the character would think, then it may be better to coordinate with the rest of your party to split up the Extraordinary Attributes between you so you can narrow down your focus while still having all different kinds of magic at the disposal of your group.

The thing about OL is that versatility is exactly what makes characters OP. We’re usually not bothered by a character being extremely good at one thing, because the GMs toolkit it varied enough to be able to challenge their weak points occasionally. However, when a character tries to be good at a lot of things (usually by abusing Attribute Substitution, Alternate Form or Shapeshift) that’s a cause for worry because it often results in the rest of the party sitting around the table bored while the versatile character solves every problem the GM provides with minimal help.

All that being said, I have some suggestions:

I agree with most of what @SamWilby has said, especially his suggestions, but let me emphasise a few of his points and disagree with some.

First of all, I’d say you are putting the cart before the horse, because your character concept seems rather vague, because when I look at the sheets I see a “I want all the Magics!” character and not a reality bender. Actually the companion comes closer to a reality bender in terms of attributes, than your main character, but maybe I only misunderstood the concept because there is little explanation provided what it actually means.

Especially your feat choices reinforce the impression of a vague or weak concept, because they seem to have only been made because of min-maxing purposes and not because narrative purposes. So I’d suggest that you refine the character concept or define it clearer and then use that concept to choose more fitting feats, that enhance and improve the strength of your concept, instead of trying to iron out any and every weakness (which will not be possible anyway).

The thing about OL is that versatility is exactly what makes characters OP. We’re usually not bothered by a character being extremely good at one thing, because the GMs toolkit it varied enough to be able to challenge their weak points occasionally.

This is where I disagree with Sam, because even though versatile characters might have a wide variety of solutions to any given problem, which might be problematic for more novice GMs, but essentially they don’t have access to anything that any other character wouldn’t have access to. So, what ends up happening more often than not, is that you steal the spotlight of your fellow players in certain situations, who have specialised in an area, while you might outdo them in an any area given a lucky roll. Heavily specialised characters on the other hand might have glaring weaknesses, but at least you’ll have a hard time challenging them in their area of expertise, as a GM.

Harsh, but just. I’ll incorporate your suggestions into my character, with a few tweaks.

I have only one objection: Companion II feat is not for min-maxing purposes only (although I admit, partly it’s true). I guess I should’ve said more about the character’s backstory, which, in short, goes like this: once a power-hungry wizard had an epiphany and understood that a mortal mind has a limit on how much magical lore it can contain. So he performed a ritual and shoved part of his knowledge into his familiar, thus transforming the beast into a magical creature and freeing a portion of his own mind to be further filled with lore.

I really don’t see a world of issues when a player wants to play a powerful character, if that’s what is fun for him/her.
I could see a beginning GM getting frustrated if he/she not able to balance encounters like he/she would want to, but that’s on the GM, not the player.
If the player tries to take the spotlight away from other characters, that’s when he/she is being a butt. That’s when the GM ought to step in. Although the character might be versatile, this system is balanced enough that the other characters can rock it too.
We run in to problems when people aren’t having fun. Whether fun is playing the interesting character concept you came up with, or being able to accel in combat is up to the players. When I GM, I like to establish what my players’ tastes are before we play.

Absolutely. I would never tell someone off for playing a powerful character, that’s why I said that the problem is with versatility. If one character can solve any problem with minimal help then that takes away from the other players’ moments in the spotlight, even if they’re better at their specialist thing than the all-rounder.

That’s the kind of thing I mean, that omnipresence in every discussion of options can cast a shadow over the other characters. If the versatile character’s player is one of the more confident players at the table then that omnipresence can easily lead to them taking over, deliberately or not. I had it happen to me a couple of times, once in a game a I played in and once in a game I ran; maybe I’m a little gun-shy about jack-of-all-trades characters because of that, but I still think it’s worth being careful with because of its potential to suck fun from your games.

Ah, yes, I know what you’re talking about. But rest assured, hoarding spotlight is not my intention. I prefer playing ultimate support characters, i. e. characters who can lend a hand in any situation and step in if a specialized character is incapacitated, separated from the group or simply is not there. I’m not trying to replace rogue’s stealth with my spells - rather, I’m enhancing it with invisibility. That kind of thing.