Something that has bothered me since I first read through the rules is the curve of the average bonus given by attribute dice. The curve seems to be seriously flattened at attribute score 10, so I grabbed some math about expolding dice and multiple dice averages, and came up with this average bonus list.
1-3.33
2-4.2
3-5.14
4-6.11
5-8.4
6-10.24
7-12.22
8-15.42
9-18.33
10-20.56
You can see that the curve gets steeper as you increase in score, until you get to 10 where it flattens.
I propose using 4d10 instead of 4d8 as the dice for attribute levell ten, which gives and average bonus of 24.4. This makes the max ability more significant, and matches the curve of progression a little better.
This graph illustrates the two curves. Current dice are the blue line, and my proposed alternative is red. 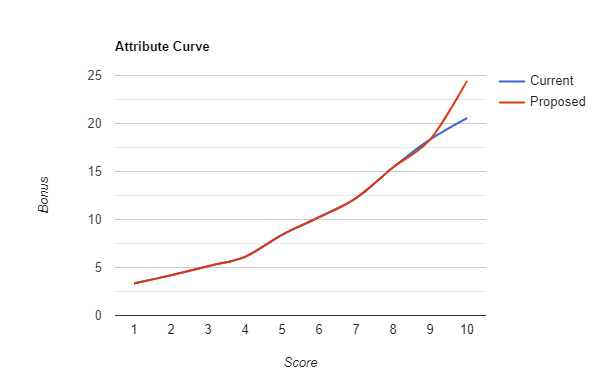 Anyone have any thoughts on the matter?

It seems like too much of a jump with your purposed, whereas the current numbers seem to be correct for the curve. I haven’t double checked your numbers, but we have had a lot of people over the years come in with similar numbers or graphs.

The thing to realize is, the big advantage for 10 is the number of dice, you are keeping 4 now instead of just 3, and at that level, with the amoutn of advantage your are probably going to be rolling with for that attribute, it affects things a lot more.

The big jumps are when you keep more dice (scores of 5, 8, 10), and by themselves are certainly higher, but when compounded by advantage, end up being even more.

Having had bosses and NPCs that rolled with a score of 10, I can say it certainly doesn’t need any more boost.

I know that @Vrenshrrg runs a high level server, so I’d be curious of his input as well on that, though I’m not sure how many people have a score of 10 and/or the feat that allows the dice bump to be like a score of 10.

In actual practice/play I don’t see this as needed.

Just based on my personal experience, Attributes past 7 or 8 actually progress a little bit too quickly, given that Defense Scores and to a lesser degree HP typically stop growing significantly at that point, when talking about a player character at least. Even with some serious Disadvantage like from Haste Actions, you can reasonably expect Attribute 10 Bane Attacks to hit the typical Defenses at those Levels a good amount of times.

I will go into more detail tomorrow, probably.

This takes into account already the greater average attained by more dice, and the higher likelyhood of explosion.
As for advantage, there is already a very nice graph in another thread that shows that the advantage gained at higher attribute levels actually diminishes the higher your score.
You can see by visual proof the matching of my curve to the steepening progression versus the flattening that the current progression takes at attribute value 10.

That is an excellent point.
I was editing the progression just for the sake of evening the curve, but derived stats do not benefit from curve at all.
I wonder have you found a good way to counteract this that makes the mechanic more interesting and not less?
I definitely see the problem with the curve of the scale, but I do very much enjoy non-linear progression. It feels to me a better way to represent a wide array of power levels than just making the progression longer and more linear.
Especially with a game that boldly and often asserts that it is not balanced, because balance is for videogames, I feel the best answer to the runaway progression of probability is something equally as fickle. Feats that provide a non-linear bonus, or maybe an only situational bonus to defenses, perhaps.

As for advantage, there is already a very nice graph in another thread that shows that the advantage gained at higher attribute levels actually diminishes the higher your score.

with score 8 or 9, if you explode on 5 dice, 2 of them don’t matter. On a Score of 10 only 1 doesn’t matter. That’s more max values you keep and 1 additional dice that your roll that can explode again.

3d8 with 8 advantage (pretty easy for that level to achieve between boons, situation and feats) is an average of 22.5 (this doesn’t take in account the d20, just attribute dice)

And yes, I saw the graph and was able to read it. I understand that a d10 will get a higher average than a d8. I’m simply stating that it really isn’t needed from actual in game experience. The fact you get to keep that additional dice is pretty big, and something my players have certainly noticed.

If you are wanting to have a big impact on rolls, changing it to 4d10 will certainly have an impact. There is little to no question about that. Whether it is good or not might be another question, as Vren brought up.

I’ve considered different progressions of the dice myself at times in the past (probably a year or more ago), though I actually went the other direction, in making the highest dice a 3d8. But that was for different reasons and with a my own design goal in mind (even if mostly just thought experiment).

The fact that I think the current dice system leads to too high of results certainly impacts my view on thoughts to raise it higher, which is why I’m interested on Vren’s additional thoughts in the morning. My way certainly isn’t the only way to look at it, nor perfect. Simply voicing them here, and I realize that text doesn’t convey tone well, so I do not mean to say your idea is impossible or universally wrong, or anything along those lines.

The system doesn’t strive for perfect balance, allowing the narrative to step in, and the potential craziness of exploding dice. It does have a base/foundation with some sense of balance however, and balance is still something you consider when making feats, boons, banes, etc.

So, most of this is just based on personal experience, and more about the context these Attributes operate in than the math behind them.

Starting around Level 5, the game becomes more aggressive with its Rolls. This is not just because of how Attribute Rolls increase by ~2 where Defenses only increase by 1, but also because character builds truly come together and more Feat Points are available for more Advantage, which as GM mentioned has a bigger impact the more dice you have.

As a result, the higher you go in Levels, the more of a rocket-tag game it becomes, with the first hit often determining the outcome or at least giving a big advantage. This is a little bit less true for simple build NPCs who don’t have to spend Attribute Points to get up to 30+ in Defense Scores, but their Attacks work against Player Characters just the same as the other way around.

This contributes to Defend Interrupt builds being popular. They have the Advantage of using the exact same scaling as Attack Rolls instead of a static value. In addition, Defense Scores get more and more expensive to increase at the cost of Attack and utility potential.

Regarding Boon Invocations, the Rolls look alright for their respective Power Levels. Here too however, higher Rolls are not only easier to achieve with easy-to-get Advantage, lower Rolls will usually still have very positive results. You do not need to Roll a 26 using your Creation 8 for the Heal Boon to work, with an easily achievable 21 even without Advantage you will still be Healing 2d6 HP, the maximum possible for a Level 1 character.

Now, this is expected to happen to some degree. Being better at things the more powerful you get is a rewarding experience for players, and in most cases the players are on the same side. It’s not a PvP game, though even that works to a limited extent.

However, solely based on personal experience, I would say it goes a bit too far. A Roll is measured by its environment, on the Challenge Ratings and Defense Scores it meets, which (with the default balancing suggestions provided by the rules and the context of Advantage) makes higher Attributes a bit too powerful in my opinion.

I wonder have you found a good way to counteract this that makes the mechanic more interesting and not less?

So far I’m a fan of @TrinitysEnd’s Equipment Overhaul homebrew, which both expands equipment options particularly of the defensive type and raises Defenses at higher Levels with less need for expensive Attribute or Feat Point investments. It’s not for everyone however, since it adds some complexity to a game that tries to remain simplistic for many things.

In conclusion, I think if anything, the dice of the high Attributes are actually a little too oppressive. Yes, the averages look alright for things like Boon Invocations, but that ignores the context that characters with access to these Attributes usually have a very easy time boosting their results using Advantage and (very often) Extraordinary Items.

Attribute 10 especially is certainly not in need of a boost, when even with Disadvantage it fairly regularly clears any Challenge Rating it would realistically encounter.

Thank you for that wonderfully thorough response.
Thanks to everyone who responded. Y’all have given me plenty to think about.