Any tips for running the game more quickly and efficiently?

So I was wondering what kind of things people can do to help for their games to run faster.
My group uses a grid to play so I am looking for tips specifically with grids in mind in particular as well as combat because combat sometimes can just slog down for us.

after a while we have resorted to only use the grid for when it is absolutely necessarry, like for movement puzzles and combat especially.
Setting up the grid takes time and when there are a lot of creatures all of which are different, takes time to all set up and write down their stats and keep track of their individual health, especially on times we have to make them up on the go because we didn’t prepare for an encounter with “x” creature, and place them on the board along with all the terrain things.

Thank you in advance.

I rarely had that problem in Open Legend so far, but something that often worked well for me is having the order of initiative open to everyone or designating one player to keep an eye on initiative, to let the others know who’s turn will come up after the current one, so that they start preparing their turns. People tend to zone out a bit when its not their turn, which is normal, but bringing back their attention the turn before their own should make things go by more smoothly.

Making sure players are aware of when their turn is coming up is a big one; a physical tracker (which can just be some pieces of paper in a row) is a huge help if you’re playing in person.

To speed up setup, I recommend dry-wipe grids and some whiteboard markers to quickly sketch out terrain. For keeping track of individual health, I recommend some tokens that you can place next to the models. I use the ones below which I got from a boardgame and I keep in small pots around the table to allow players to distribute them as well as me. 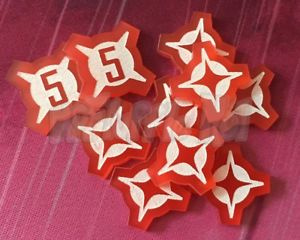 edit: another thing which comes to mind is to skip the “cleanup”. Once it becomes clear that the party are definitely going to win, you can just narrate the rest of the battle in 30 seconds rather than forcing them to spend 3 rounds chasing down the last few enemies. It saves quite a lot of time if you want to fit more into your sessions.