In my opinion Reach property has much more potential than just bonus range on weapons, so I made this modification with @SamWilby and @Vrenshrrg. It makes using reach weapons more interesting, change gameplay, forces user to keep distance from enemy and it comos well with Evasive Footwork Feat, because it gives both reach and non-reach huge advantage over other one. Any suggetion is more than welcome:
Reach - This weapon extends the natural melee range of the creature by 5’. Additionally:
-attack of oportunity occurs when enemy enters weapon range, not when leaves it,
-when attacking within 5 ft, it gains disadvantage 1. 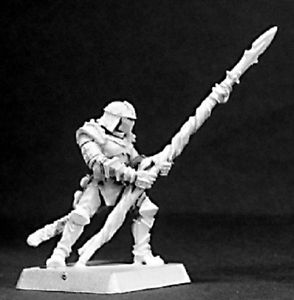 Sounds interesting, though I’m not as much a fan of the disadvantage 1 part. For certain weapons it might make more sense, but overall, even long weapons tend to be able to be gripped differently to handle those closer.

Does this apply to ALL reach weapons, or just some, or you can choose to have the normal reach or this version when you pick a weapon?

It’s up to gm, I guess. Only melee weapons for obvious reason. I am not fan of disadvantage too, butfrom my experience as a martial artist those kinds of weapons tend to be bulky and less effective than hand to hand combat. Sure, you can grab this kind of weapon closer to the edge, but you need to trust me in that case, this grab limits your movement, and are more about defending yourself rather than attacking. There is also one more good thing about it is that it speeds up combat in two ways: more opportunity attacks and warriors are forced to MOVE. From my perspective melee fighters stand next to each other till someone is dead. It brings more excitement to the battlefield when they need to be in constant movement or else enemy would be ahead.

The idea of disadvantage 1 came up because part of @Igotex’s suggestion for why they wanted this rule was to encourage melee fighters to use different weapons for different purposes. Reach weapons are already strictly better than non-reach melee weapons (discounting all unrelated factors), adding an additional bonus on top of that seemed like it would make it so only Reach weapons ever got used, so a small penalty seemed to make sense. Worth noting that for most Reach weapons the disadvantage only cancels out the advantage from two-handed so it’s hardly severe.

indeed, I ended up seeing some of it on Discord after I finished with the forums.

I’d almost think it might make a good feat rather than a weapon property, and might make sense. If anyone just picks up a reach weapon, they might not wield it effectively to be able to do that attack… but that depends on the game perhaps more…

I think it should still be an option though for weapons.

Reach (normal as is on weapons)

Heavy Reach (what it is above with AoO and Disadvantage, etc)

B/c I certainly see that a bit more for a lance potentially, but both as a martial arts myself, and watching people demonstrating how even in tight quarters a properly trained warrior will be able to use the weapon very effectively b/c of it’s design.

A weapon should just be an extension of yourself, and that’s why most people who pick up weapons struggle, b/c they look and focus only on their weapon… BUT we aren’t trying to strictly simulate realism here anyways, and that’s a whole other convo that doesn’t really need exploring.

By adding the 2nd it still allows flavor on the weapons and makes some reach weapons more unique.

What you said is very interesting, to be honest I thing it’s good idea, too. Feats often represents fighting style in some way. My question is: how much feat points should it costs? I am not good in this type of things, so I ask @SamWilby or @Great_Moustache for help.
And one more thing: if this feat change fighting style based on weapon property, is it a good idea to do the same thing with other properties, gather them in 1 feat and let choose 1 “fighting style” per tier of the feat? An example includes attack using momentum with disadvantage x with “Delayed Ready” weapon.

since the restriction would already be on a Reach weapon in general, I don’t think you need to limit it any further with identifying a specific weapon like Attack Specialization does.

And it’s only something you can do once per turn b/c it is using your AoO (unless you further invest feat points into being able to make multiple AoO, which would make sense to apply to this as well).

It is fairly powerful, in that it is common for someone to move into your range with melee, BUT, you’d probably only get it once per target, and if multiple targets move into range, you only use it on one without further feat point investment so… probably 2 feat points I’d think seems reasonable for it. Maybe only 1…

I’m fairly tired right now though, so I’d have to think, I’ll let others weigh in on it.

I think I’d peg it at 1 feat point, or 2 without the disadvantage drawback. It’s going to be useful in nearly every fight, but usually only once or twice.