I would like to DM a Kingdom Hearts inspired game and I’ve heard from Puffin Forest that Open Legend is an excellent free generic system.

The time in which I’ll set the campaign is long before Birth by Sleep. It will take place a few months after the world was separated into different worlds after the Keyblade War. In this campaign, I’ll go with the interpretation that the worlds are different universes rather than different planets.

I may not like the overall story of Dream Drop Distance, but I saw nothing wrong with the execution of the Sleeping Worlds and the Dream Eaters. The main setting in this campaign would be various Sleeping Worlds. Since the Sleeping Worlds were never explained in DDD, I plan to reveal the ultimate cause behind them in the campaign.

I understand that preparing for the game and making a general outline for what will happen in each world would be essential.

Some of the worlds I plan to use are Coco, Brother Bear, Pocahontas, Princess and the Frog and Inside Out.

The PCs will likely be a mixture of OC Keyblade wielders and Disney characters sent to investigate what went wrong in the separation.

There are many things I would like some help statting up. Firstly, Drive Forms. Drive Forms are super-powered forms that Sora is able to use in KHII and in the future, KH3. And I would like all of my PCs to be able to use them, including non-Keyblade wielders. Sora mostly powers up by fusing with one or more of his teammates. The Limit form is the only form where he is able to trigger it alone. Should I include a penalty form like the Anti-Form to balance out the PCs’ usage of them?

Nextly, Dream Eater helpers. Dream Eaters can be either good or bad and the Spirits, the good ones, can be created by gathering materials in the Sleeping Worlds. How would I make these NPC helpers?

Keyblade customization would also be essential. How would the Keychain system fit into Open Legend?

Lastly, Dive Mode (a means of traveling to the Sleeping Worlds in DDD). How would I utilize the travel between worlds and the enemies which will attack you during the travel period?

First and foremost I never played kingdom hearts so I can’t answer all your questions, I do however know open legend fairly well.

So first of all you should not tunnel to hard on getting every mechanic aspect transferred focus more on what gets the feeling of it.

Having keychains that argument your weapon in different ways should not be hard. You can eacy make items that gives magical abilities.

The core items might look a bit boring on the surface because it’s not necessary tied to your damage output like in many other games. But then you realize you can a lot of weapons for you character without sacrificing damage and realise how some that is. Getting sidetracked here. 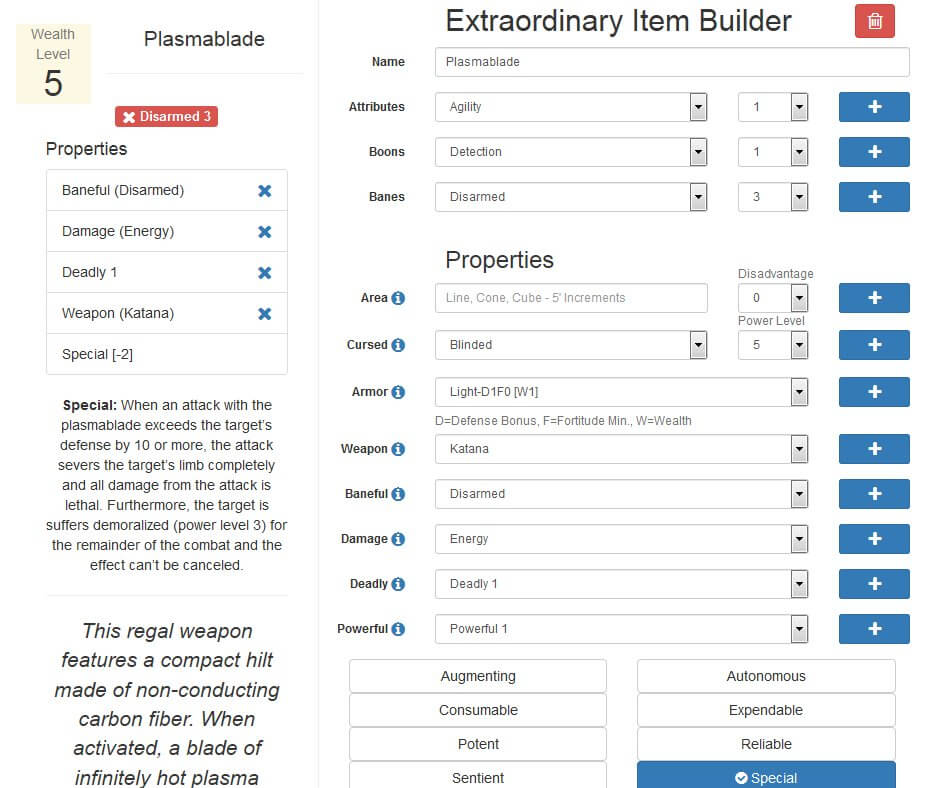 Build Extraordinary and Legendary items based on the Open Legend RPG core rules. Calculates wealth level automatically and can be printed as an easy handout.


This is an awesome web page with an item creator, the core game don’t have so many items but rules for making them. I guess the wealth system is less relevant but can be a good indicator of power level.

The wiki page have only been out for a week or two but there is starting to come some items there, and if you make some that you like we would be happy if you share them with us

Having dual worlds should not be a problem its your game you can give the players abilities that fits your world. When it comes to the transaction of world’s I’m sure you can find a way to make it interesting for the characters, if the characters can’t rly fight back there is a defend action in the game, atleast then the players get to role some dices and get to feel that they have an impact on outcome.

Normal damage is easy to heal up between combat but leathal damage takes more time, use this for traps and maybe the world travel to make it so the characters want to avoid it and have to be careful with his much they use it (obviously if you want to travel a lot then you probably don’t want this)

Spirits? If they are permanent companions there is a feat players can get named companion (and if they die or leave for other reasons you get the points back)

Could not answer it all but it’s a start, if you are familiar with pen and paper games then it does not take so long to learn most of the system (we all miss a rule here and there at first but thats for all games)

Take a look at http://openlegendrpg.com rules, heromuster is a good page aswell and the young wiki got a little bit of homebrew

@Frank Sora has 5 Drive Forms with one penalty form. Would OL support the amount of drive forms he has?

lots of ways you can represent that, so it depends on how you do it.

You can with Alt form, Companion, or items (though I’m not super familiar with Kingdom Hearts to say more).

By default there are 2 ways to change forms, with a feat that give you another form like the Hulk, werewolf so on. The other way that is more flexible is with the alteration attribute casting shapeshift boon, this one is pretty open ended and on higher levels there is not much restrictions other then you can’t have a stat higher then your alteration and what the GM let’s you get away with.

Ah, thanks! You and @Frank answered my questions.

EDIT: Except for one thing. Is it possible to have one weapon with a lot of alternate forms?

Other EDIT: Is fusion possible to stat up?

Yeah items is also a good one like greate mustache pointed out, even if the mechanical change is small there is no limit in how much of a cosmetic change you get

The game is pretty flexible when it comes to taking out new weapons, so if you wanted an all in one weapon that you there is little mechanical advantage over someone having lots of different ones. If anything is a disadvantage of you get disarmed over someone different weapon for different forms. So it’s not imbalanced

Fusion hmmm so like anything you want is possible, is it like team limit breaks? I’m thinking maybe use legend point for this tho they often generates from roleplaying, but are used by some to go for more epic attacks.

I’m off to bed, but short story is that some of us have a crono shift game going and we did a bit of homebrew to try and make team attack a thing, normally there is a fairly simple assist system. But it should not be hard for you to come up with some ideas to make this.

@Frank No. Actual fusion, as in merging with someone else.

Oh, yeah (have not played the game) well in raw there is no rules for it, probably because it’s a highly situational power that is not common in most classic settings. It also leaves the players with one important question; who will role the dices?

There is nothing stopping you from making homebrew for this tho if you find it important for the setting.

Personally I would not be a big fan if an entire combat would revolve around my character merging into someone else and that was all I got to do for that combat.

Maybe it plays out differently in the game I would not know, you would have to explain it more in detail if I were to come up with ideas to how you could make it.

Drive Forms are super-powered forms that Sora is able to use in KHII and in the future, KH3. And I would like all of my PCs to be able to use them, including non-Keyblade wielders. Sora mostly powers up by fusing with one or more of his teammates. The Limit form is the only form where he is able to trigger it alone. Should I include a penalty form like the Anti-Form to balance out the PCs’ usage of them?

Fusion would definitely be something you have to house-rule I’m afraid, and it’s kind of a complicated one. Not something I’d recommend you trying out for your first time with the system, you should definitely play through a few games first to see how the different levels of attributes and advantage feel to play.

If you really want Kingdom Hearts to be your first game, maybe try it without the fusion forms to start with and add them later when you’ve gotten used to the system. Limit form is possible in a couple of different ways, I’d suggest either the Battle Trance or Alternate Form feats (where you would build your character with a normal spread of abilities and then build the alternate form heavily focused on combat). I wouldn’t recommend including too many penalties, OL works at its best when your players can do their cool stuff all the time. I’d also suggest not forcing these abilities on players. Let them build their characters how they want, even if that doesn’t include something that you think is important, because you don’t get to decide what’s important to their characters.

If you really really must have fusion forms then try the vehicle rules at the bottom of the Special Equipment chapter. Make each form a “vehicle” with its own attributes and feats, and make sure it has multi-pilot so everyone who fuses gets a chance to do something rather than one character in control while the other players have to sit and wait. This comes with my recommendation to try it without first, but if you just can’t imagine the game without fusion this is your best bet.

Nextly, Dream Eater helpers. Dream Eaters can be either good or bad and the Spirits, the good ones, can be created by gathering materials in the Sleeping Worlds. How would I make these NPC helpers?

Guidelines on building NPCs can be found in the Running the game chapter, as long as you don’t make the allies too powerful they shouldn’t cause any problems. If they’re too strong or too common you’re going to have problems balancing the difficulty of your game.

Keyblade customization would also be essential. How would the Keychain system fit into Open Legend?

Check out Special Equipment for examples of how to make Extraordinary weapons. As above, be careful not to make them too powerful too early. The Extraordinary Item Builder recommended by @Frank is very helpful (read the rules on item creation first though, so you understand what you’re making) and that website also has an automated character sheet which I use a lot.

Lastly, Dive Mode (a means of traveling to the Sleeping Worlds in DDD). How would I utilize the travel between worlds and the enemies which will attack you during the travel period?

Travel isn’t really something I’d feel the need to make a rule for. As the GM, you decide how they do it, how long it takes and how likely they are to be attacked. If you want to add an element of chance, make a table of 12 encounters (some hard, some easy, maybe some blank) and roll a d12 when they go into Dive Mode to decide what happens.